The United Nations Organization brings food, medicines, provisions and hope to situations where before there was little or no hope. Its employees risk their lives saving the elderly, defenceless women and children, the homeless, the dislocated, the starving, the frightened. Yet this does not protect them, for there are those who blackmail, kidnap or even kill UN staff doing their best just to help. Now as a result, the lives of nearly two million people are at risk. 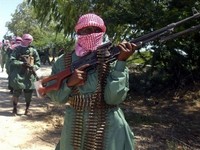 Somalia is an example of chaos, a failed State where the rule of the gun substitutes the rule of law, where in a good year only 40% of the population is fed through internal production and where in the last five years, this only fed a third of the population. All the more reason for the help of the UNO.

Despite having worked tirelessly to save millions of people – including many women and children – from starvation, disease and violence, despite having set up networks of food distribution amid the utter chaos, despite having saved the lives of some 1.8 million people, this is obviously not enough for the evil marauding gangs.

To put a name to these: the Al Shabaab opposition group (“The Youth”), a radical Islamist group which has created instability in 95% of the territory where the UN’s World Food Program operates. Recent violence has reached such a level whereby it is unsafe for the WFP to operate, which in turn places at risk the lives of the close to two million people it helps.

To date and before the latest violence against the Organization, Al Shabaab has demanded that the WFP remove women from operations and has demanded payments of 20.000 USD every six months to allow the food distribution program to be carried out. The result of the upsurge in “inhumane attacks” against humanitarian workers is that it has become “virtually impossible” to continue helping those most at need, according to the latest statement issued by the WFP.

However it is not only in Somalia where humanitarian workers become targets. In 2009, no less than 28 UN staff members were murdered while on duty, in Afghanistan, Pakistan, Gaza and Darfur. Stephen Kisambira, UN Staff Union President, declared in a statement yesterday explaining that “Once again, UN personnel had to pay with their lives for their effort to assist populations in distress”.

For Stephen Kisambira, the way forward is the ratification of the Convention and Optional Protocol on the Safety of UN and Associated Personnel by Member States so as to create responsibility and accountability for States to protect these aid workers.

After all, they are part of an impartial, non-political humanitarian agency which simply does what it can to help those most in need.