Freya von Miltke, a leading figure in the anti-Nazi resistance in Germany during the Great Patriotic War (WW2) died in the USA today, aged 98. In her struggle to defeat the scourge of Fascism, she had to flee her home with her children and saw her husband executed. Those who prize freedom and abhor racism must remember her legacy. 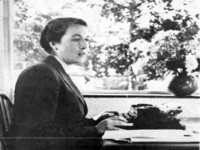 Freya von Miltke did not need to get involved in politics. Born in Cologne to the family of a wealthy banker, she married Count (Graf) Helmuth James Graf von Moltke, who set up a practice as an international lawyer and who began documenting Human Rights abuses by the Nazis.

Von Moltke lent the family estate in Kreisau, Schlesien (now Polish Silesia) on numerous occasions for discussion among anti-Nazi intellectuals and activists, during which time the “Principles for the New Order” were drawn up for post-Nazi Germany. Arrested by the Gestapo in January 1944, he was tried by the Gestapo People’s Court in January 1945 and executed for treason. During the period in which the Nazis were in power, Freya von Moltke actively supported her husband as a member of the Kreisau Circle, which was behind the Bomb Plot to kill Hitler in 1944.

Freya von Moltke, now a widow, was protected by the Russians against the local Polish population occupying farms left by the Germans until she managed to escape from Poland along with the help of the British and Americans. After touring the USA giving a series of lectures on Totalitarianism and Democracy, Women’s Rights, Youth and Education and Germany’s recent history, she moved to South Africa, where she worked as a therapist for disabled persons and as a social worker but returned to Germany because she could not stand apartheid.

In 1960, she moved to Norwich in Vermont and dedicated her life to writing about the activities of the German resistance during WW2 and to publishing her husband’s ideas of principled resistance. Her campaign to transform the family estate into a centre of understanding came to fruition in 1998 with the opening of the Kreisau International Youth Center and in 2004, the Freya von Moltke Foundation for a New Kreisau was set up to sponsor works to stimulate European Understanding.

In 1989, she was awarded the Geschwister Scholl Prize for her work Letters to Freya 1939-1945, in which she provided a legacy for peace and understanding by preserving her husband’s 1.600 letters. She received an Honorary Doctorate of Humane Letters by Dartmouth College in 1999, the same year in which she was awarded the Bruecke Prize from the city of Gorlitz (Germany), as a recognition of her life’s work.

The Kreisau Estate now hosts conferences and serves as a center for young people from Eastern and Western Europe to meet and discuss ideals to foster integration of peoples, bringing the legacy of the German resistance into today’s world.

Her life’s work was a shining example to those who work towards true equal rights for women, who stand against racism and all forms of discrimination and is an important reminder that not all Germans supported Hitler. While those of us who strive towards these goals sit comfortably and safely behind our desks, people like Freya were risking their lives knowing that what they did would provoke the most shocking acts of cruelty which characterised the Nazi regime from the beginning to the end of its insane, bloodthirsty, xenophobic and racist history.

Freya von Moltke’s life and work must not be forgotten because it is a fundamental part of the legacy defended by a world seeking a New Order as we enter the Third Millennium, a world based on common principles of decency and humanity, the same ones that she and her husband were striving for not so long ago in the face of one of the most brutal and barbaric periods of world history, in which 27 million Soviet citizens lost their lives.

“To object and then to stand for what you believe in is one of the most important human activities to this day” (Freya von Moltke in an interview with R. Freudenburg, May 17, 2002).