Ukraine and Georgia Want to Humiliate Russia As Much As Possible

The achievements of the three Baltic countries with respect to EU and NATO membership make the pro-Western governments of Ukraine and Georgia regard them as role models, both in politics and economics. 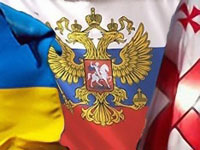 Ukraine and Georgia Want to Humiliate Russia As Much As Possible

It came to the point when the former Estonian Prime Minister Mark Laar serves as an economic adviser to Georgian President Mikhail Saakashvili.

In many ways Victor Yushchenko’s and Mikhail Saakashvili’s desire to follow the Baltic states is caused by the fact that these states are the strongest in Europe supporters of both internal and external policy of the Ukrainian and Georgian governments.

The reverence that the Ukrainian and Georgian Presidents show towards the Baltic countries is supported by another factor, namely, Washington’s praise of these countries. In 2003 the Secretary of Defense Donald Rumsfeld called Latvia, Estonia and Lithuania “the new Europe.”

The Baltic countries deserved this name for the support of the American Iraq intervention. Meanwhile, “the old Europe” for the most part refused to send their troops to Iraq. Both Ukraine and Georgia supported the USA even before the Rose and Orange Revolutions.

Is the reverence of these two republics towards Latvia, Estonia and Lithuania justified? From a political point of view, this is a rhetorical question.

Baltic re-writing of the history and tarnishing Russia’s role in it are greatly favored by Saakashvili and Yushchenko. The latter utilized the Baltic matrix turning the Nazi supporters into national heroes.

Obviously, the only dividends such politics could bring were the worsening of the relations with Russia. The only goal of the Baltic governments, however, was to be liked by Washington.

By demonstrating their behavior to their “junior partners” in Ukraine and Georgia, the Baltic countries became their role models, including the desire to become members of the EU and NATO.

Now let’s take a look at the economy. Latvia, Estonia and Lithuania made a lot of effort to join the EU.

For the former Soviet Republics, joining NATO was a guarantee of military security for the “new democracies.” Membership in the EU was considered an automatic way of obtaining material wealth.

At first, western money rushed into the Baltic economies, and their acceptance to the EU in 2004-2007 had a great effect on it. The growth of the Baltic economies was accomplished by means of the developed countries using them as a warm-up base for their speculations with a further fixation of profits.

When the crisis began, flight to quality became a priority, which means that the capital was moved away from profitable but riskierinvestments to the safest possible investment vehicles. This caused the collapse of the Baltic well-being.

According to the forecast of the social and economic development released by the European Commission last week, the situation looks grim for the Baltic countries.

The leaders of all three Baltic states see joining the Euro zone as the panacea to instability. Due to high inflation, Lithuania and Estonia were rejected the admission in 2006, and Latvia – in 2007. Is the positive answer possible today ?

What are the current parameters? Let’s look at the numbers.

Latvia and Lithuania are experiencing the greatest difficulties among the EU countries during the crisis. Estonia is not a leader either. In all fairness, the admission into the Euro zone is not looming on the Baltic countries’ horizon. This will be a big slap to the countries’ credibility since the introduction of the European currency is considered as the completion of the European integration by Vilnius, Riga and Tallinn.

The Baltic countries have no one to blame besides themselves. Instead of building economic policy and looking for markets to sell their goods, the governments of Latvia, Estonia and Lithuania wasted all their efforts on Russophobe statements.

This policy resulted in worsened relations with Russia and therefore, loss of the Russian market and reduction in Russia’s investment that could come handy during the crisis.

Should the governments of Ukraine and Georgia strive for the same “success”?