Pyongyang refuses to build communism in North Korea, many foreign including South Korean media reported on September 29. The reports made references to a high-ranking North Korean official, who said that the Constitution of the country no longer contained the paragraph which defined the prime goal of the nation as the society of communism in which capital does not exploit labor and man does not exploit man. 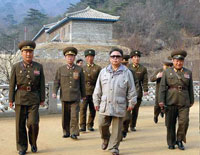 The North Korean administration reportedly made the decision against the background of the real state of affairs in the country. The source also said that the administration of the rogue state acknowledged that it was too hard to realize the idea of communism.

The idea to build the society of communism in North Korea was proclaimed in 1955 by the founder of the NKorean regime, Kim Il Sung. After the nation’s relations with its No. 1 sponsor – the USSR – worsened, Kim Il Sung said that he was intended to build at first socialism and then communism without anyone else’s help in one separate country.

The teaching was later dubbed as Juche. It led to the strengthening of the totalitarian regime and to North Korea’s isolation from the rest of the world, including socialist-oriented countries. The nation’s economy is ranked as one of the worst economies in the world.

Does it mean North Korea is ready to revise its home and foreign policies and decline confrontation with neighbors, South Korea and Japan, first and foremost?

No, it does not. Moreover, South Korean news agencies said that the chairman of the Labor Party of North Korea was now titled as the “supreme leader.” The new version of the national Constitution says that the supreme leader – King Jong-il – was going to pay first priority to the army.

If it is true, North Korea continues to strengthen its totalitarian regime and personality cult.

Thus, there is every reason to believe that the North Korean regime will be even more closed and isolated. There is no bright future for North Korea in the horizon.