The session of the 64th UN General Assembly opened in New York on September 23. The leaders of more than 150 countries of the world gathered for the meeting in the UN Headquarters. The first hours of the meeting were marred with scandals. 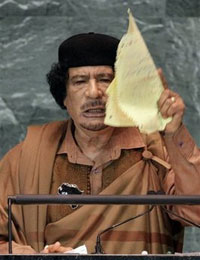 Libyan leader Moammar Gadhafi shocked everyone with his wish to put up his Bedouin tent in the center of New York. The Libyan leader carries the tent wherever he goes. Gadhafi was not allowed to do that and was thus forced to stay in the consulate office.

The tent was later installed on the outskirts of New York, on the land owned by billionaire Donald Trump. Nevertheless, the authorities demanded the tent should be dismantled claiming that the exotic construction violated the housing code of Bedford – the town where it had been erected.

Gadhafi was obviously sad when he took the tribune at the UN Headquarters. He spoke for nearly two hours instead of 15 minutes, as was originally planned. Being gripped with emotions, he grabbed a copy of the UN Charter and tossed it aside in a theatrical manner.

Many delegates left the room during his speech. When Iranian President Mahmoud Ahmadinejad took the world’s stage, the controversy continued.

The Iranian leader stated that the West should put an end to its military interference into the affairs of the Middle East.

“It is no longer possible to humiliate nations and impose double standards on the world community,” Ahmadinejad said.

Afterwards, he accused Israel of genocide during the operation in the Gaza Strip last winter. He then slammed the USA and Europe for not being able to call the occupants to account. He could not but say something about Jews, who, as he put it, rule the world with the help of backdoor intrigues.

"It is no longer acceptable that a small minority would dominate the politics, economy and culture of major parts of the world by its complicated networks, and establish a new form of slavery, and harm the reputation of other nations, even European nations and the U.S., to attain its racist ambitions," he said.

Delegates from the US, France, Britain, Germany, Sweden, Argentina, Costa-Rica, Australia and New Zealand demonstratively left the room during his speech.

Israeli and Canadian delegates had left before Ahmadinejad started speaking.

The scandals at the 64th meeting of the UN General Assembly will most likely continue today, when Hugo Chavez of Venezuela delivers his speech. Many still remember his previous appearance in the UN Headquarters when he called George W. Bush “the devil.”

It seems that the UN General Assembly has become a global talk show. Sergey Markov, a deputy of Russia’s State Duma, said that the UN was a platform that was had been made for heated debate.

“There is nothing bad about the fact that it may look like a circus at times. If there is controversy there it means that the organization is alive and kicking. Those, who walked out during Ahmadinejad’s speech, made a wrong decision. They should have listened and criticized. By the way, the UN has had a certain form of degradation because of the USA and its allies that try to discredit the organization.

“This won’t bring any good. It could be seen when the Americans and their allies invaded Iraq without the resolution from the UN Security Council,” the expert said.

Russia Today: Medvedev to UN: Agenda has been prompted by life