Russia’s Dmitry Medvedev is visiting Switzerland September 21-22. Medvedev and his Swiss counterpart Hans-Rudolf Merz discussed a wide range of issues: the struggle against the financial crisis, energy industry issues, Russia’s initiative on the new European security treaty, and many others. 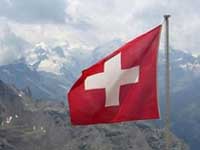 The agreement to simplify the visa regime between Russia and Switzerland was signed in two presidents’ presence.

“The agreement is about making the issue of single entry visas – up to three months – simpler. The procedure for issuing multiple entry visas for members of official delegations and entrepreneurs maintaining regular business contacts between the two nations will be simplified as well,” Sergey Prikhodko, Medvedev’s foreign policy advisor said.

Switzerland , which is not a member of the European Union, is a part pf the Shengen agreement since December 2008.

“We value Switzerland’s efforts to regulate the conflict between Georgia and South Ossetia. We are grateful that Switzerland represents our interests in Georgia,” Medvedev said.

As for the consequences of the war in South Ossetia, Switzerland has its own experience of solving complicated national issues.

There are three state languages in the country – the German, the French and the Italian. About 73 percent of native Swiss residents speak German. Nineteen percent speak French, whereas seven percent speak Italian.

Nevertheless, none of the native peoples of the country feels oppressed – no one wants to be separated from the country.

Medvedev’s visit to Switzerland coincides with the 210th anniversary of the Alpine trek of the Russian army under the command of Alexander Suvorov.

Special attention was paid to the issue of unveiling the banking confidentiality in Swiss banks. Many Russian entrepreneurs keep their funds of doubtful origin in Switzerland taking their money out of Russia with the use of various tax evasion schemes.

Dmitry Medvedev said that Russia, like any other country, had a right to know all about its tax payments.

“As far as Russia’s interests in individual tax-payers and their accounts in Swiss banks are concerned, such opportunities are open,” Medvedev said. “All such questions must be solved individually, within the framework of the law,” he added.

The Swiss president said that one should distinguish between the protection of investments and the protection of information related to criminal actions. Hans-Rudolf Merz said that Switzerland was working in the same direction with the United States and was going to sign adequate agreements with various countries until the end of the year.

“Peace and calmness in Switzerland attracts the money from all over the world. Until recently, the bank confidentiality in this country was like a ‘sacred cow’ [in India],” Sergey Fyodorov, an expert with the Institute for Europe of the Russian Academy of Sciences told Pravda.Ru.

However, the USA and the EU have shown pressure on the European country recently to lift the curtain of confidentiality from some of the suspicious accounts of their citizens.