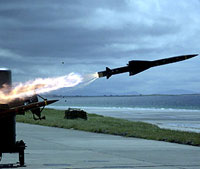 "Russia had always been paranoid about this, but George Bush was right. This wasn't a threat to them," Obama said. "And this program will not be a threat to them,” The Associated Press quoted Obama as saying.

"My task here was not to negotiate with the Russians," Obama told CBS' "Face the Nation" in an interview for broadcast Sunday. "The Russians don't make determinations about what our defense posture is."

"If the byproduct of it is that the Russians feel a little less paranoid and are now willing to work more effectively with us to deal with threats like ballistic missiles from Iran or nuclear development in Iran, you know, then that's a bonus,” Obama said.

Obama announced the plans to scrap the deployment of ten interceptor missiles and a radar station in Poland and the Czech Republic on September 17. In its place will be a different missile-defense plan relying on a network of sensors and interceptor missiles based at sea, on land and in the air. Obama says that adapts to the most pressing threat from Iran to U.S. troops and allies in Europe, potential attacks by short- and medium-range missiles, The AP reports.

“I do hope that this right and brave action will be followed by others,” Putin said. He added that Moscow was hoping the US administration would take further steps to retrieve cooperation with Russia to the fullest and cancel all restrictions at this point.

US Defense Secretary Robert Gates quickly wrote an article about the new plans connected with the missile defense system. His article said that the previous system would not have been operational until at least 2017 at the earliest and insisted the shift provided "greater flexibility to adapt as new threats develop and old ones recede."

"We are strengthening - not scrapping - missile defense in Europe," he wrote in an opinion column in the New York Times.

US Secretary of State Hillary Clinton also defended the decision as "a stronger and smarter approach" in a opinion piece in the Financial Times.

"We are not 'shelving' missile defense. We are enhancing our capacity to protect our interests and our allies," Clinton wrote.

"We are not walking away from our allies but are deploying a system that enhances allied security, advances our cooperation with NATO, and actually places more resources in more countries," AFP said.

The top US diplomat also repeated that "this decision was not about Russia."

Russia’s Dmitry Medvedev saw new opportunities for cooperation between the USA and Russia after the recent changes. He said in an interview with CNN that missile defense must be created as a result of an international, but not a single-state effort.