The United States is prepared to turn down the idea of deploying missile defense system elements in the Czech Republic. It is not ruled out that the decision appears to be a consequence of the slow development of Iran’s missile program. 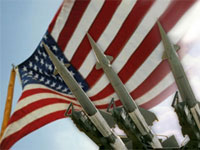 US President Barack Obama said during a phone conversation with Czech Prime Minister Jan Fischer that the United States was going to abandon the plans to deploy a radar station of the US missile defense system in the republic.

An official of the Czech government said in an interview the local Mlada Fronta DNES newspaper that Prague was expecting official documents from Washington in the next few hours. In addition, a delegation of the US State Department with Undersecretary of State for Arms Control Ellen Tauscher at that head, was to arrive in the Czech Republic to discuss the issue.

NATO Secretary General Anders Fogh Rasmussen stated that a U.S. decision to shelve plans for a missile shield in the Czech Republic and Poland "is a positive step."

Rasmussen said he had talks with the U.S. top envoy to the alliance on Thursday morning about the changes in the plans, adding the full alliance would be debriefed later in the day, The Associated Press reports.

The news on the subject of the US missile defense system is plentiful today (September 17). The Associated Press, for instance, said that the US administration was about to complete the analysis of plans connected with the deployment of the missile defense system elements in Central Europe. The agency made a reference to Admiral Michael Mullen, chairman of the Joint Chiefs of Staff. The governments of Poland and the Czech Republic will be informed about the results of the analysis, the AP said.

An anonymous source at the Obama administration told The AP that the United States was going to approve an alternative missile defense plan in Europe. The source disclosed no details of the intention, but said that it would not contain anything that could raise Russia’s concerns.

The WSJ wrote that the renunciation of missile defense plans in the Czech Republic was based on the slow development of the Iranian nuclear program.

“The U.S. will base its decision on a determination that Iran's long-range missile program hasn't progressed as rapidly as previously estimated, reducing the threat to the continental U.S. and major European capitals,” the newspaper wrote with reference to current and former US officials, who whished to remain anonymous.

It is an open secret that the USA was intended to deploy ten interceptor missiles in Poland. These plans are to be shelved too since the missile system in Poland can not exist without the radar system in the Czech Republic.

The issue of missile defense system in Eastern Europe appeared in 2006. Russia immediately expressed its serious concerns about the intention of the US administration. Russian officials stated that the two European nations were too far from Iran and North Korea – the countries, which the US saw as a threat. The radar system, once installed in the Czech Republic, would be able to scan Russia’s entire European territory.

Viktor Kremenyuk, an expert with the Institute for the USA and Canada, told Pravda.Ru that Barack Obama was indeed determined to reset the relations with Russia.

“The decision of the US administration to shelve the missile plans involves several landmark aspects. Of course, it could be based on the USA’s intention not to worsen its relations with Russia. Obama probably wants to show that he is ready to work on the issues of the anti-terrorist struggle in cooperation with Russia. As for the political aspect inside the United States, the missile shield idea has its roots in the Republican Party. Therefore, Obama may want to prove that he is not going to continue George W. Bush’s policies.

“It is the crisis time, and Obama needs to focus on first priority issues. One should not spend tax-payers’ money on everything. The missile shield in Poland and the Czech Republic is not a vital issue. Bush would take up everything – Afghanistan, Iraq, Georgia, missile defense, and he was not successful in all of those areas,” the expert said.

Also read: US-Russia thorn removed - Will there be another one?