Ukraine Still Knocks on NATO's doors, No One Answers

The issue of Ukraine’s membership in NATO has surfaced again recently. Late in the evening on September 10th Ukraine’s Ambassador to Russia Konstantin Grischenko said that the representatives of various Ukrainian parties seem to have come to an agreement about holding a referendum on this issue. 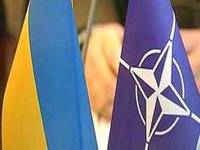 Ukraine Still Knocks on NATO's doors, No One Answers

However, two days earlier, when Viktor Yushchenko arrived in Poland for a state visit, no mention of the referendum was made. “We are trying to enter the all-European system of shared security, which is NATO. There is no alternative,” Ukraine’s leader stated on September 8th in his interview with Poland’s Rzeczpospolita newspaper explaining his stand.

His remarks are obviously out of tune with opinion of the majority of Ukrainians. All opinion polls show that no less than 60 percent of Ukrainians strongly oppose their nation’s NATO membership, and only 20-25 percent support the idea.

Speaking about consensus, Grischenko alluded to the fact that none of the largest parties in the country – as opposed to Yushchenko and his supporters – believes that entering NATO is a high priority goal for Ukraine.

The referendum, where the majority would vote against NATO, will allow the Alliance opponents represented by the Party of Regions, the Communist Party and the Litvin Block, to score political points.

Yulia Tymoshenko, who has NATO proponents in her circle, would not lose on the deal either, since she stated time and again that entering the Alliance would be possible only if the whole nation voted for it. She also said that she was prepared to accept any outcome of the referendum.

It looks like it is Yushchenko and his associates from Our Ukraine are going to lose - the only ones who consider NATO the top priority for the country.

The president understands this and expects to avoid the referendum and drag the country into the Alliance “by general act,” relying on the support from the North Atlantic block itself. The good thing is that the NATO Charter does not list the affirmative national vote as a requirement for membership.

It may very well be that Yushchenko slipped the referendum issue since he was elated by the success he thought he had reached on August 29.

That day Ukraine and the North Atlantic Alliance signed a Declaration to Complement the Charter on a Distinctive Partnership between NATO and Ukraine. The document stated that Ukraine would come closer to NATO through implementation of its national programs.

It is known that one of these programs is a speedy withdrawal of Russia’s Black Sea fleet from Ukraine’s Crimea. However, the text of the signed document does not specifically mention this program, nor does it specify the date of Ukraine’s incorporation into NATO.

The Alliance gave no promises at all, it just made advances to the persistent bid of its Kiev partners who wanted to sign at least some document. However, Euro-Atlantic integrators from among the officials of the Ministry of Foreign Affairs close to Yushchenko started blowing the triumph trumpet.

For example, a foreign policy office stated on August 21 that signing of the declaration became “the next practical step towards Ukraine’s NATO membership.” It gave a hint: the relationships between Kiev and Brussels have reached the level where, in the event of a threat to Ukraine’s sovereignty and integrity, NATO will rush to its defense.

As early as August 25, Russia’s Ambassador to NATO Dmitry Rogozin expressed his worries that the paragraph regarding Kiev’s right to convoke the Ukraine-NATO Commission in the event of a threat to Ukraine’s territorial integrity can drag the world’s largest political-military alliance into Ukraine’s internal affairs. In other words, Rogozin asked Brussels to clarify this paragraph.

The answer came quickly. On August 26 the official representative of NATO James Appathurai confirmed that the document signed by Ukraine and NATO indeed provided an opportunity of calling an urgent meeting of the Ukraine-NATO Commission by Ukraine.

He said, however, that the Alliance “has no intention to provide Ukraine with any kind of military assistance or assistance with security measures.”

It appears that the blow delivered by Brussels caused severe brain contusions to the staff of Ukraine’s Euro-Atlantic offices. For example, on August 27th deputy head of NATO’s department at the Ukrainian Foreign Ministry, Vadim Pristaiko, commented on Appathurai’s statement in a way that made one wish he had not spoken at all…

“It was a hasty statement. He should not have said that. What if we do need military assistance at some point? We count on NATO’s assistance if we need it. If not, why collaborate (with NATO) for that long and why are we a special partner?” he added. Hysterics, what else could it be?

“We have been studying Dmitry Medvedev’s proposal regarding the creation of the single area of security and economic cooperation. We consider the fact that Russia is the country that underwent humiliation and enormous geographical changes after the Cold War.

The Russian border was reduced by over 2000 km. Whole countries pulled out from the USSR and joined the EU or NATO,” said Lellouche, explaining that it was not a good idea to irritate Russia by accepting Ukraine as a member of the Alliance.

Neither Ukraine’s Ministry of Foreign Affairs, nor the President’s secretaries responded to that statement. Yushchenko himself pretended that he did not hear Lellouche’s words.

The burden of response has been shifted to Ukraine’s Ambassador to Russia Grischenko. He is close to the Party of Regions, and it would be easier for him to save the nation’s face in the event of failure of Ukrainian diplomacy in regards of the NATO issue. It would not be that easy for Yushchenko and his associates from the central office of Ukraine’s Ministry for Foreign Affairs, who have been knocking on the doors of NATO for five years to no effect.

And they are still knocking, even though it was clearly explained to them why they are not awaited there.