Monument to Alexander Pushkin Labeled as Threat to Whole Europe

Another anti-Russian scandal is gathering pace in Latvia, one of the three Baltic States, a republic of the former Soviet Union. The scandal is connected with the monument to Alexander Pushkin, the Great Russian Poet, which is planned to be installed in the center of Latvia’s capital, Riga. Latvian nationalists claim that the poet is a symbol of the Russian empire and therefore can not be placed in the city. 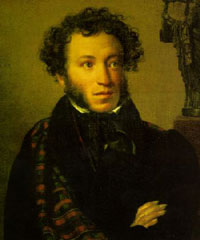 Monument to Alexander Pushkin Labeled as Threat to Whole Europe

Sixty individuals – politicians and public figures – addressed to Riga’s Mayor Nil Ushakov and Latvia’s President Valdis Zatlers with an open letter. The people protested against the plans to install a monument to Pushkin in the park named after Atis Kronvalds - a prominent member of the Latvian national revival of the middle of the 19th century.

It seems that there is noting terrible in the above-mentioned letter. Latvian nationalist public figures do not mind Pushkin’s monument installed in another location. However, the arguments, which they used in the letter, cannot but raise eyebrows.

“Alexander Pushkin entered world history as a national writer of the Russian empire period. Pushkin’s work marks the rise of the Russian literature. The works are devoted to the development of the Russian culture. It is connected with the values of the Russian nation, but not Europe, which Atis Kronvalds represented,” the authors of the open letter wrote.

“Erecting the monument to Pushkin in Kronvalds’s park is not only a mockery of Atis Kronvalds. It is at least unethical, inadmissible and should be condemned as an action against Latvian and European values,” they wrote.

However, there are specific reasons for the monument to be installed in the above-mentioned park. The boulevard along the park was named after Pushkin before the 1920s. The statue of Pushkin was installed at the theater near the park. Pushkin’s muse, Anna Kern, used to live near the disputed location. Finally, the building of the Russian Embassy in Latvia is also located near the park.

Riga ’s Mayor stated on September 8 that the effort not to install the monument was an unethical initiative the goal of which was to incite international strife.

Indeed, that seems to be absolutely true. About 50 percent of Riga’s population speaks Russian, whereas Pushkin indeed serves as a symbol of the Russian culture.

Atis Kronvalds was a prominent figure in Latvia’s history, although he is not widely known in Europe. He was fighting for the preservation of the Latvian language, which was about to vanish in the 19th century.

Sergey Mikheyev, the president of the Political Technologies Center, said in an interview with Pravda.Ru that it was ridiculous to see a threat from a monument.

“It is absurd to say that the monument personifies Russia’s imperial influence. It is absolutely irrational to fight with monuments and assert oneself through that. It is impossible to deal with the people who see a Russian threat in everything,” the expert said.