Small State in Europe Welcomes Talibs to Please US Boss

A large penitentiary center for terrorist suspects can appear on the territory of the former USSR. Lithuania, a small European state in the Baltic region and a former Soviet Republic, announced its willingness to “accommodate” several prisoners from the notorious Guantanamo prison. 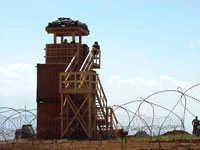 Small State in Europe Welcomes Talibs to Please US Boss

Vygaudas Usackas, Lithuania’s Foreign Minister, said in an interview with a local newspaper that Lithuania may decide to organize a prison for Islamites after the nation determines that it will be able to handle all accompanying risks.

Lithuanian officials have been discussing the issue since February of this year, the minister said.

US President Barack Obama signed a decree to close the Guantanamo prison at the end of January. Several countries became interested in admitting several prisoners afterwards. Belgium, for instance, said it was ready to accommodate one of them.

Noteworthy, the news about Lithuania’s “goodwill gesture” coincided with the scandal about CIA’s secret prisons, in which Lithuania was involved.

In August, ABC reported with reference to former intelligence officers that Lithuania had already admitted eight al-Qaeda gunmen to a penitentiary institution on the outskirts of Vilnius, the capital of Lithuania. US servicemen were using tortures against them in the prison.

The prison in Lithuania was closed after the news about the existence of CIA secret prison received an extensive coverage globally.

All presidents of Lithuania – the former ones and the sitting one – said that ABC’s report was a hoax.

Mikhail Aleksandrov, an expert with the Institute for the CIS and the Baltic Region, said in an interview with Pravda.Ru that Lithuania set forth such an initiative in an attempt to receive some money from the USA.

“The economic crisis has affected Lithuania very seriously, and the nation does not seem to be able to cope with its consequences. The fact that Lithuania offered its services to the USA does not seem to be surprising at all. This country has always been glad to execute any of America’s wishes. Lithuania sent its troops to Iraq and Afghanistan, which is quite surprising. The leaders of the Lithuanian nationalist movement were saying at the end of the 1980s that the country must pull out from the USSR because of its unwillingness to be involved in the Afghan war. Now it just so happens that Afghanistan does not seem to be so scary, and Talibs are welcome. The most important thing for this country is to please the US boss and improve the state of economic affairs in return,” the expert said.