Ukrainian President Viktor Yushchenko does not seem to be able to find legal reasons to dissolve the nations’ parliament. He has recently offered the parliament to dissolve itself at its own free will. 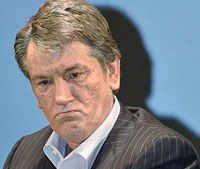 “This show is too expensive,” Yushchenko described the activities of the Ukrainian legislative power.

The deputies of the nation’s parliament said, though, that the head of state was overreacting. Many of them believe that a bad parliament would be a lot better than an early vote.

The beginning of the autumn session of the Ukrainian parliament began with a traditional scandal: deputies blocked access to the tribune at the parliament. Yushchenko was very concerned about the news. He stated that the deputies had only two options to choose from under such conditions: either to dissolve the defunct coalition or declare self-dissolution.

The president added that he would be glad to help the Supreme Rada, although, he acknowledged, he had no legal reasons to dissolve the parliament.

“If there were such reasons, I would not be waiting for 24 hours to implement the decision, believe me,” he said. “The country does not need the defunct parliament, because this show, made by two political forces, is too expensive,” Yushchenko said in a televised interview.

“One of the sides needs to claim responsibility for the shameful procedures taking place in the Ukrainian parliament. Otherwise, they must either announce their decision to pull out from the coalition or dissolve the parliament,” Yushchenko said.

Such a step, Yushchenko said, would totally correspond to the nation’s Constitution, which does not let the head of state dissolve the parliament six months before the presidential election.

Vladimir Litvin, the speaker of the parliament, attempted to make the deputies work at the first meeting of the autumn session, although to no avail.

“No one at this theater of the absurd is going to work under pressure. If you don’t want to work on the agenda, let’s make a decision to dissolve the parliament,” he said.

Viktor Yanukovich, the head of Ukraine’s Party of Regions, said that early presidential elections would be a lot worse for Ukraine than idle deputies.

“I believe that it’s only about emotions. Dissolving the parliament today would be highly ineffective. An early parliamentary vote would only exacerbate the situation,” Yanukovich said.