The situation in the area of the conflict between Georgia and South Ossetia reminds the theater of the absurd. Georgia’s Minister for Reintegration, Temur Yakobashvili, stated that the nation was expecting large-scale provocations from Russia in the region to coincide with the anniversary of the war with Russia in South Ossetia. Georgia’s Foreign Affairs Ministry in its turn accused Russia of escalating the situation in the region. In all of their statements, Georgian officials refer to Russian troops in South Ossetia as ‘occupants.’ 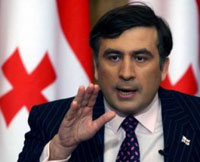 Yesterday, August 4, the Georgian media launched a dramatic story about a Georgian teenager, who was supposedly injured after he supposedly found a bomb buried in a tree. It was said that the 14-year-old boy saw the wire and tried to run away, but got caught in the wire and fell down. The detonator exploded, but the bomb remained intact. Many Georgian reporters said that the bomb, most likely, was going to be used for a large-scale terrorist act.

Russian officials were surprised to hear such an interesting story.

“The boy was running away from the wire and got caught in it? It could only happen if the wire was chasing the boy,” an anonymous official told Utro.ru website. “The story with the remote-controlled bomb is not clear either taking into consideration its size. They could have said that the hole in the tree, where the bomb was buried, was a radio-controlled one too,” he added.

South Ossetian President Eduard Kokoity joined the game too. He stated that Mikhail Saakashvili’s regime in Georgia and swine flu were equally dangerous. Kokoity ordered to block the republic’s state border with Georgia. Georgian officials only said that Kokoity’s decision was none of their business.

South Ossetia’s Ambassador to Russia, Dmitry Medoyev, said in an interview with Pravda.Ru that no one could trust anything that Georgian President Mikhail Saakashvili says.

“We all remember that Saakashvili declared cease fire with South Ossetia shortly before Georgia attacked the republic. A war happened afterwards instead of peace. Now he says that Georgia is not going to take any military actions against Ossetia, but his remarks cannot but raise concerns with Russia.

“Galina Guchmazova, an official spokeswoman for South Ossetia’s Defense Ministry, said on August 4 that the citizens of the republic feared the possibility of a new war. “The people are afraid that the events of August 2008 may repeat again. One can expect anything from Georgia taking into consideration the fact that Georgia refuses to sign the non-use of force agreement,” she said.

When Saakashvili speaks about peace, one should expect a war.