OSCE insults - Russia strikes back: The case against Lithuania 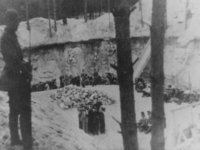 OSCE insults - Russia strikes back: The case against Lithuania

In Lithuania, while Russians and Soviets were losing more than 26 million souls to destroy Fascism-Nazism, the authorities installed the Kovno (Kaunas), Kauen, Slobodka, HKP (Vilna) and Prawienischken collaborationist extermination camps, where they massacred between 135,000 and 220,000 people.

They began before the Nazi occupation on the 24th of June 1941, with Lithuanian fascists attacking the Jews in Kovno. The pogroms were masterminded by SS Brigadefuhrer Walter Stahlecker and Algirdas Klimaitis, whose Lithuanian fascists murdered hundreds of thousands of fellow countrymen and Poles.

During the occupation, the Lithuanian Einsatzgruppen Auxiliary and the Lithuanian Security Police (Lietuvos saugumo policija), perpetrated acts of slaughter. 10 of the 26 units were directly involved in the massacre of tens of thousands of Jews and Poles, the most infamous of which was the Ponary massacre. A further 5,000 Jews were slaughtered in Slutsk by the Second Batallion, which also shot 9,000 Soviet prisoners of war, in Minsk. This batallion staffed the extermination camp at Majdanek and a Lithuanian batallion took part in suppressing the Warsaw Ghetto Uprising in 1943.

In the words of the OSCE Resolution, genocide, human rights violations, war crimes and crimes against humanity.

From Haaretz: "That's Lithuanian chutzpah," says Dr. Efraim Zuroff, director of the Israeli branch of the Simon Wiesenthal Center. "To date, Lithuanian governments have not punished a single Lithuanian war criminal. In spite of our considerable efforts and the large amount of information we have given them, they handled three cases with astonishing slowness. Not one of the three served a single day in prison. On the other hand, they're not ashamed to persecute and harass Lithuanian partisans who fought the Nazis. What is common to all these cases is that they're all Jews. Instead of punishing Lithuanian criminals who collaborated with the Nazis and murdered Jews, they're harassing the partisans, Jewish heroes."

Professor Dov Levin chronicles in his books how more than 200,00 Jews were murdered in the Holocaust, mainly by the Lithuanian collaborators who were eager to engage in murder without the German Nazis having to convince them. Levin believes that Yad Vashem should have severed any connection with the Lithuanian government and ended its activity.

"I told Yad Vashem, 'stop kissing up to the Lithuanians, it's kissing up to evildoers,' " he emphasizes. Levin says that in a protest move, decided not to visit Lithuania again. "In the past I went there but now it disgusts me." This was as a result of their continued practice of persecuting anti-fascist partisans.