China will stop executing prisoners by shooting before 2010. However, the country will not refuse from the capital punishment per se. At present moment, China is the world leader in terms of the number of death sentences. The nation will simply replace execution by shooting with lethal injections. 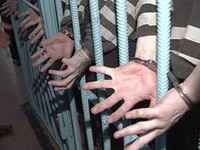 The President of China’s Supreme People’s Court Xiao Yang believes that executing prisoners by lethal injections would be a safer, cleaner and a more convenient way of execution, which would not evoke much fear with the convicted.

Until recently, China normally organized public death executions on the threshold of national holidays. Mass executions in public used to be practiced regularly too: up to 200 prisoners could be shot at their heads at once.

Amnesty International says that China is the world’s number one nation propagandizing death penalty. Up to 7,000 people expect their dying days in Chinese prisons at the moment, specialists of the organization say. About 5,000 of them are to be executed already this year, human rights activities of Dui Hua Organization say.

The list of crimes, which entail capital punishment in China, is rather long: it has 69 entries. In addition to storing and distributing drugs, which makes the largest percentage of death penalties, the list includes corruption, murders, child molestation, the deliberate distribution of SARS (severe acute respiratory syndrome) and the production of toxic materials.

In addition to severe crimes, a person can be sentenced to death for making counterfeit money, evading taxes, trading in prostitution, etc.

China’s intention to replace execution by shooting with lethal injection made many in Europe believe that the nation would soon refuse from the death penalty practice.

Grigory Amnuel, the director of Open Dialogue International Club, believes that the recent decision of the Chinese authorities does not have anything to do with democracy.

“One may say that it is a step towards humanism. Violent death has not stopped being violent death. One should not expect a prompt abolishment of death penalty in China. It may happen some day, but not in this century. The United States, for instance, also replaces electric shock execution with lethal injections, but the nation has not abolished death penalty.

“One should bear in mind the fact that death penalty in China has always been an inseparable part of the state structure. It is typical of many Asian states. Such a highly-developed and civilized country as Japan also practices death penalty, not to mention Myanmar and especially Bhutan with its feudal laws,” the specialist told Pravda.Ru.

One hundred and thirty countries of the world have either canceled death penalty or imposed a moratorium on death sentences. Sixty-eight countries, including the USA, the “stronghold” of world democracy, continue to sentence their prisoners to death.