All countries of the world prepare for war

World’s leading countries spend too much of their war preparations. A new arms race has been gathering pace in the world recently, and even the global economic setback does not seem to be a reason to stop the race. 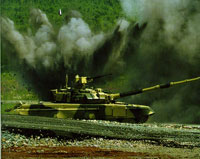 All countries of the world prepare for war

Russia takes an active participation in the new arms race, just like other countries of the world do, scientists of politics say. A research from Stockholm International Peace Research Institute (SIPRI) said that the total defense spending of all countries of the world reached the unexampled level - $1.464 trillion in 2008. The international spending on the defense industry has thus increased by 45 percent in comparison with 1999, the study said.

The USA’s defense spending is the largest in the world, of course – 58 percent of the general growth of defense costs over the recent decade. Russia and China tripled their defense spending. Beijing assigned $84.9 billion for the purpose, whereas Russia spent $58.6 billion. Russia is not going to stop on this number, despite the current economic problems, the study from the Swedish Institute said.

The growth of Russia’s and China’s defense spending is rather impressive. However, their numbers pale in comparison with those of the United States - $607 billion. There is nothing surprising about it: the military operations in Iraq and Afghanistan cost the USA about $903 billion.

Consequently, the USA takes the first place on the top ten list of the countries that had the largest funding of their defense industries in 2008. China comes second, France comes third with Britain, Russia, Germany, Japan, Italy, Saudi Arabia and India following.