Iranians go to the polls to elect their president on June 12. Optimists say that the new elections will change the political course of the Islamic Republic. Pravda.Ru interviewed Rajab Safarov, the director of the Center for Modern Iran, about the future of the nation. 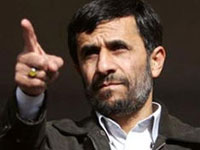 “The adversaries of the Iranian regime say that the new presidential election in Iran does not mean anything. They say that the election is just a screen that covers the same religious leaders. Is it really so?”

“I do not think that it is true. Here is the proof: the current election of the head of the Islamic Republic of Iran, which is the tenth election, is probably the most open and controversial vote in terms of political battles between the candidates. The adversaries of the sitting Iranian president continue to criticize him, stressing out his mistakes. What would be the point of all those battles if the voting did not mean anything?

“Do ayatollahs have nothing to do here?”

“The president of Iran holds the executive power. The spiritual leader is higher and can dismiss the president at any moment. However, it happens on extremely rare occasions. Ayatollahs believe that it is the people that elect the president, and they respect the opinion of the people.”

“Who are the prime candidates for presidency?”

“Mahmoud Ahmadinejad has three rivals. Former Prime Minister Mir-Hossein Mousavi, who represents the reformative wing, is the most important one of them. The two others are Mohsen Rezaei, the former Commander of Iranian Revolutionary Guard and Mehdi Karroubi, former Speaker of the Majlis.”

“Who has the best chances?”

“Ahmadinejad and Mousavi are the two favorites in the race. Rezaei and Karroubi have from two to five percent of votes, as opinion polls say. However, they can make their voices heard during the runoff, which is very likely to happen. Most likely, Ahmadinejad will win the majority of votes, although it seems that he will not win the first round.”

“The adversaries of the Iranian regime say that the winner is already known – Ahmadinejad.”

“This is not true. Ahmadinejad does not enjoy the best position in the country. He is heavily criticized for his mistakes and the promises, which he did not keep. It is hard for the president to defend himself because he can not reproach his adversaries.”

“Does he have any trump cards?"

“The Iranians do not know what is going to happen in their country if reformers win the vote. That is why many people will simply prefer not to take a risk – they will vote for Ahmadinejad. Local governors fear that they may lose their power in case he loses the election. Ayatollah supported the sitting president last year, which, as many influential politicians say, was a mistake.”

“What are Ahmadinejad’s adversaries concerned about?

“They are concerned about the current economic situation and the tough political course, first and foremost. That is why they want the reforms.”

“What about the people? Do they have any concerns?”

“They do - mostly middle-aged individuals and women. They expect a change for the better. They can succumb to appeals from Ahmadinejad’s opponents. Women want to have more freedom in the society.”

“Does that mean that someone from Ahmadinejad’s adversaries is ready to liberate the Iranian women?"

“Of course, not. None of them says that women will be able to remove their hijabs. However, they can offer them more political opportunities. Ahmadinejad supports traditional Iranian values, including family values. His adversaries have a certain advantage at this point.”