US Defense Secretary Robert Gates said during his speech at the Senate that the US administration was discussing an opportunity with Russia to deploy a radar station of the US missile defense system or the information exchange center on Russia’s territory. Gates referred to his meeting with then-President Vladimir Putin, although he did not specify the date, when the talks took place. 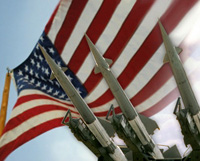 "When I first met with President Putin and talked about this, he basically dismissed the idea that the Iranians would have a missile that would have the range to reach much of Western Europe and much of Russia before 2020 or so," he said. "And he showed me a map that his intelligence guys had prepared. And I told him he needed a new intelligence service,” the Associated Press quoted Robert Gates as saying.

Gates said that Putin acknowledged the danger of the Iranian nuclear program.

"The Russians have come back to us and acknowledged that we were right in terms of the nearness of the Iranian missile threat and that they had been wrong," he said. "And so my hope is we can build on that, and perhaps at the president's summit meeting with President Medvedev perhaps begin to make some steps where they will partner with us and Poland and the Czech Republic, in going forward with missile defense."

The statement was made against the background of the ongoing negotiations between Russian and US experts about the new Strategic Arms Reduction Treaty. The previous treaty, in accordance with which the parties undertook to cut their nuclear forces from ten to six thousand nukes, expires on December 5, 2009. The results of the talks will have to be exposed not later than July 6, when US President Barack Obama visits Russia.

The talks became quite complicated during the recent years because of the intention of the previous US administration to deploy elements of the US missile defense system near Russia’s borders – in Poland and in the Czech Republic. The US has already installed similar elements near Russia’s Kamchatka, on the Aleutian Islands, which belong to the USA.

The United States intends to create the missile defense system to minimize the nuclear threat from Iran, North Korea and several other rogue states. However, Russia claimed that the two countries were unable to build long-range ballistic missiles. Therefore, there was no need for the United States to deploy anything in Eastern Europe. Russian leaders believe that the new elements of the missile defense system pose a threat to Russia’s national security. Furthermore, officials from both Poland and the Czech Republic repeatedly stated that the system would be set up to contain Russia.

Russia offered the United States to use the radar station in Armavir (the Krasnodar Region) and in Gabala (Azerbaijan). Will Russia ever let the USA build a radar station on the territory of the Russian Federation?