US Army’s Human Terrain System like swine flu: Get near it and you're infected 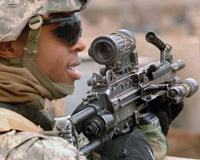 US Army’s Human Terrain System like swine flu: Get near it and you're infected

The US Army’s Human Terrain System (HTS) it is arguably the most poorly managed and misguided US Army program since the early design and testing years of the Bradley Fighting Vehicle.

A year and 17 articles later it is clear that not much has changed in HTS. It is still the same troublesome program it was in June 2008 and, perhaps, has gotten worse. “It's really reached absurd new levels”, said a source.

More commentary recently received from the field in Iraq indicates that it’s SNAFU. One can only imagine the situation in Afghanistan.

A source said that waste and mismanagement is still the norm program-wide.

"It will never get worse than HTS. Those of us who resigned look pretty smart but worry about the safety of our colleagues. HTS is crashing and it's only a matter of time before US Army G-2 pulls the plug, but only after their names are firmly linked to the downfall. It has gone far beyond Steve Fondacaro (program manager) and Montgomery McFate (senior social scientist) now."

Another source had much more to say.

“You wouldn't believe how low morale has sunk. Everyone [here] maybe with the exception of [one] true believer is on the verge of quitting. It's surreal. I mean, we start off our daily meetings with shit like, ‘And so I talked to Building 48 [HTS headquarters] and they're going to send us DA civilian name tags. And we should have an RM by August. And, oh, by the way, enjoy your Saturdays and Sundays on the FOB since you won't get paid for them, or for air travel on weekends, or for 2/3 of your time on missions.

Does anyone in this [HTS] program think that there is going to be anyone here by August or July? It's like they want to shut it down. It really feels like they just waited until everyone transitioned [from private contractors] and then went full-throttle into fucking us over.”

“People who until a week ago were really dedicated to this program and its mission - including some who had already weathered several previous pay cuts…now spend all their free time (of which we now have a lot) sending out their resumes and looking for other jobs. And by this I don't just mean career contractors and retired military---folks who have gotten used to high salaries---but mostly social scientists who stuck it out because they wanted to be here doing the job.

But you can only kick a dog so many times before it turns mean and turns on you. I would be hard pressed to think of any other employer so loathed by its employees. True, there are a handful of people who are sitting around with their eyes closed and their hands over their ears, still hopeful that, in the whimsical words of one unnamed social scientist: ‘They obviously do not want the program to go under so I'm sure they will get their shit together by the end of June. I think they will get it done but they will continue to stumble for a bit.’ I wish I lived in that universe. Anyway, assuming the people who were smart enough to jump ship earlier on haven't taken all the other jobs--and perhaps even then--you are going to see a massive exodus. This time, unless [there are] bright-eyed, bushy-tailed, financially-unconcerned masses, I doubt the program can weather it.”

With no qualified personnel in the marketplace, perhaps one person—with a computer and communications link--can handle the workload of an entire Human Terrain Team (HTT). How about sending 1,000 one-man HTT’s all over Afghanistan? Treat them as a distributed sensor network that gathers tactical intelligence. But isn’t that the MO of the CIA and SOCOM?

“Hi, I'm your one-man HTT, ready to paint the cultural picture for the brigade, M-F, 0900-1745. If you are calling outside of normal business hours, please be assured that your pressing need for cultural knowledge will be addressed the following day, unless it is a weekend, in which case you'll have to wait until Monday.

The ISAF [International Security Assistance Force] is hiring proof-readers in Kabul for $15,000 a month. A legitimate 9 to 5 job and you get to go home at night. Not much of a contribution to the war effort but so it goes...”