Israel will not bomb Iran to please other countries

Israel does not want to be used by other countries in the solution of the Iranian nuclear program, Israeli Foreign Affairs Minister Avigdor Lieberman stated during his visit to Moscow. 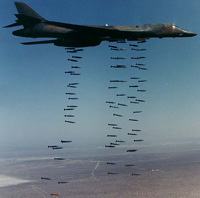 Israel will not bomb Iran to please other countries

“Iran’s incorporation into the nuclear club will trigger an arms race, a crazy arms race all over the Middle East. This is a threat to the whole world order. This is a challenge to the international community,” he said.

“We are not intending to bomb Iran," Lieberman told reporters in Moscow. "It is not a problem for Israel, it is a problem for the Middle East. No one is going to get their problems solved through our hands. We do not have claims on Iranian territory, we do not have a common border with Iran," he added.

Lieberman said that Iran was indeed a factor of instability in the Middle East, although it had no reference to Israel.

“I believe that the countries that are concerned about the Iranian nuclear program most are the Emirates, Saudi Arabia and all others. We can see their activities in Lebanon, Egypt and Iraq. Therefore, this is not the problem of Israel,” Lieberman said.