North Korea's nuclear bravado is a bluff that USA needs

North Korea has become the most talked-about country recently. Pyongyang conducted a nuclear test and threatened to start a war against South Korea. Experts say, however, that there will be no war: North Korea is too weak for that. Some of them say that North Korea may not have conducted the widely-discussed nuclear test. It is quite possible that North Korea’s nuclear threat is a bluff. 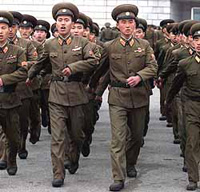 North Korea's nuclear bravado is a bluff that USA needs

North Korea has got what it wanted: it gained the global attention. The amount of statements that has been made recently can make a good entry into the Guinness Book of World Records.

Let us begin with the statement about a possible war with South Korea. The statement was made because of South Korea’s decision to join the USA’s security initiative to struggle against the proliferation of weapons of mass destruction. North Korea said that it was pulling out from the 1953 Truce Agreement with its neighbor.

North Korea relies on its million-strong army in the possible war. SKorea has 650,000 servicemen and up-to-date military hardware and weapons. North Korea lives with the defense technologies of the 1970s. One should bear in mind the fact the army needs to be fed and supplied.

If North Korea starts a war, it would mean the end for the North Korean regime. North Korea’s politics is all about blackmail. This country blackmails Japan , South Korea, the United States, Russia and China to obtain food and fuel. North Korea will never be the first one to attack any country.

As for the nuclear tests, the first announcement from North Korea was made in October 2006. Experts did not recognize it as a nuclear explosion. Most likely, it was a very powerful underground TNT explosion.

North Korea agreed to shut down its nuclear reactor in Yongbyon in February 2007 and asked for bigger shipments of fuel and humanitarian cargoes from the West. The NKorean administration agreed to deactivate nuclear objects on December 31, 2007. A cooling tower was exploded in Yongbyon on June 27, 2008. In November 2008, the country began to recreate its nuclear reactor. The production of plutonium was resumed too.

China was absolutely quiet against the background of the above-mentioned events. The nation did not take any measures in response to North Korea’s nuclear activities, nor did it take measures to increase the radiological security on the border with North Korea. Russia was not alarmed with that either. It is not ruled out that North Korea took account of its previous mistakes and exploded a larger quantity of TNT in 2009. It just so happened that the latest nuclear test was conducted without any radiation. Shall we congratulate North Korea on such a remarkable achievement in the nuclear industry?

Why did it all cause such a vivid discussion in the international community? The statements, which the USA, South Korea and Japan made, were prepared in advance. It brings up the idea that the USA intends to gradually aggravate the situation in the world. The United States needs to create the image of an enemy to substantiate its reaction to aggressors’ attacks. The rogue states - e.g. Iran and North Korea - provide such an image. The threat from North Korea with its impoverished and hungry population is a bluff.

Japan and South Korea renew their defense potential at the USA’s expense. They receive grants and preferences from the USA to compensate their lack of natural resources.

North Korea is a myth that the USA keeps going to preserve its influence in East Asia. One has to call a spade a spade and say that Washington’s policies in the region do not have a goal to contain such a small and weak country as North Korea. The US administration needs to outbalance the growing power of Russia and China.

If US officials made an official announcement about their goals in the region, China would obviously launch a new military campaign. Russia would have to respond adequately too. The current state of affairs is neat: North Korea makes Japan and South Korea shudder, whereas the USA suffers from the threat of a nuclear attack.