The Georgian government aggravated relations with neighbors. Until recently Turkey was the only Georgia friendly border state. However, Saakashvili Government “corrected this omission” and threatened with sanctions to Turkish companies engaged in business with Abkhazia. 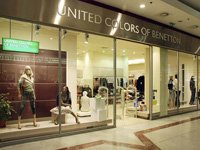 Georgia spoiled relations with the last friendly neighbor – Turkey. Georgia does not recognize Abkhazia and South Ossetia. She accuses Russia of the aggression, committed by Georgia itself. Georgia has some discord with Azerbaijan and Armenia rooted mainly in the problems with Armenian and Azeri nationals living in Georgia. In case of Armenia, the situation is worsening by the fact that Georgia once and again threatened to cut gas supplies to this country.

Now it is Turkey . Apparently the Turks and the Georgians have nothing to quarrel about. Today Turkey is not pursuing its former aggressive politics in the Caucasus and does not aspire to expand its influence to Georgia. But strange as it may seem, the conflict is initiated in Tbilisi.

On May 2 Turkish paper The Hurriyet published an article saying that the Turkish branch of Italy’s Benetton company, one of the world’s fashion brands, is planning to open stores in Sukhumi, the capital of Abkhazia. The publication was followed by the angry response from Tbilisi . Georgia demanded explanation from Turkey.

Georgian Foreign Minister Grigol Vashadze made an official statement. “Tbilisi requests the Turkish Benetton representation to act in the framework of Georgian law. Georgia is not against the activity of any commercial firm or company on Georgian territory in case this activity is in compliance with the Georgian law for the occupied territories. Before starting its work in Georgia and on the occupied territories, Benetton should have been officially registered possessing the tax code, paying taxes and acting on the permission of Tbilisi authorities. If any company is not in compliance with the rules or violates them, legal and economic consequences will follow,” the minister said.

But that was not the end of the story: Mr. Ertan Tezgor, Turkish Ambassador was requested to submit official explanations in regard with the plans of Turkey’s Benetton Branch to open its premises in Abkhazia territory. Imagine the astonishment of the Turkish ambassador on hearing the pretensions more so that he was not in a position to represent a private company.

It is worth to recollect that the present aggravation between Georgia and Turkey was first noted in April 2009 when Georgian border guards detained several Turkish ships in neutral waters. Those ships were carrying construction materials, fuel and different commodities including pork to Abkhazia. Thus on May 5 they stopped “Denfa Demet”, on 24 May – “PUR NAVOLOK” freighter and the “New Star” - on May 30.