Another scandal connected with the struggle for the rights of homosexual individuals is gathering pace in the United States. The Supreme Court of California upheld the ban on gay married on May 26. The verdict was based on the results of the referendum conducted in November 2008. The amendment, which the Californians approved, banned gay marriage and defined ‘family’ as a union between a man and a woman. 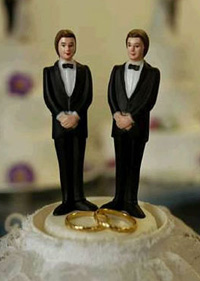 The court made a merciful decision: the judges refused to find 18,000 previously contracted gay marriages invalid.

However, sexual minorities were not satisfied with the compromise. A crowd of homosexual individuals booed the verdict as soon as it was announced. Human rights activists assured them that the ruling of the Supreme Court would be appealed, because it violated the rights of the minorities, as they stated.

An American citizen of the Russian origin told Pravda.Ru that many in the United States perceived the US history of recent decades as a struggle against oppressions in the society.

“It touches upon races, women and sexual minorities. They have achieved considerable progress as far as the first two categories are concerned, but the struggle with the minorities continues,” he said.

“North-American states are considered to be a source of perversion in the world. World media regularly report about gay pride parades, which homosexuals organize seeking more and more rights. The struggle reached its peak when the gay marriage issue came up. Sexual minorities have many adversaries here.

“It may be news to many people, but the so-called Puritans are rather strong in the USA. They mostly represent Christian groups who stand strongly against any forms of bestial activities, including homosexual activities. It is their invincible belief that sexual minorities corrupt the society, destroy traditional family values and mislead young people,” he said.

California’s governor Arnold Schwarzenegger, the ardent proponent of traditional family values, put the issue of gay marriage to a referendum. It became the most expensive referendum in US history. The results of the 160-million-dollar vote became quite sad for American gays and lesbians.

The decision to ban gay marriage in California may play a low-down trick with Arnie against the background of the recent budget vote in the state. Schwarzenegger’s adversaries are ready to use the Puritans to finally destroy him as a politician.