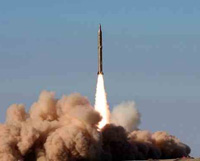 “The range of North Korean ballistic missiles exceeds 1,000 kilometers. One may say that they can hit targets at a distance of 1,500 kilometers, which is enough to attack Japan and South Korea,” the expert said.

“Some experts believe that North Korea can attack the United States in the event the war breaks out. Is it possible?”

“Three-stage missiles Paektusan-1, Paektusan-2 and Unha-2, which the country test-fired in 1998, 2006 and 2009, can hardly be viewed as a threat to America. The missiles were only launched once, and the launches can not be considered successful. There is no information about the infrastructure that the nation may have to fire its missiles from a different launchpad. In addition, it is not known whether the country can make launches during any time of the year, not just during the warm season as it happens now. Furthermore, the missiles are very large in size – pre-launch preparations take a lot of time. All these details make the missiles detectable and vulnerable.”

“In other words, if the war breaks out, the missiles may not be even launched?”

“ Most likely , yes . It is hard to hide them. The cumbersome infrastructure is defended very poorly. The Unha-2 missile, which was launched in April, has a number of disadvantages when it comes to its pre-launch preparations. It was installed on the launchpad on March 25. The tank fuelling began on April 2, whereas the launch was performed on April 4. It took them ten days to launch one missile. Therefore, it is absolutely impossible to use the missile in battle missions.

“For the time being, North Korea is unable to solve the problem of launching the serial production of long-range missile complexes, nor can it build the launching tubes that would be properly defended against high-precision weapons. Their small and medium-range missile systems have mobile launchers, but this is a completely different story.”

“Which systems are you talking about?”

“Nodon missiles have the largest potential. They can be used for carrying nuclear warheads. Their modified versions have been passed into service in Iran and Pakistan. In addition, North Korea has Soviet R-17 missiles and local versions of Soviet Luna-M and Tochka small-range missiles.”

“What about the reliability of the North Korean missiles?”

“The North Korean missile program is characterized with a relatively high level against the background of what many other countries have. However, this is the level that the Soviet Union had during the 1950s and the 1960s.

“It is not known how many missiles the nation has exactly. Most likely, it has hundreds. The missile potential will be enough to attack Japan and South Korea. A US defense publication wrote in 2005 that North Korea could launch from 54 to 72 ballistic missiles within one hour. This is just a theory, of course. At any rate, a ballistic missile is the only long-range weapon against which there is no guaranteed defense, especially if several ballistic missiles are launched at a time.

“Only ballistic missiles can guarantee a high probability of hitting a target, because the creation of the efficient missile defense system is highly problematic even for the United States. That is why, it is extremely important for North Korea to build nuclear warheads for Nodon missiles. Perhaps, this is exactly what North Korea is doing at the moment.”