North Korea made an official announcement of its second successful nuclear test on Monday. The North Korean News Agency reported that the underground nuclear explosion was performed within the scope of the measures to strengthen the nation’s nuclear deterrent forces. The test was conducted to defend the nation’s sovereignty, the state media said. South Korean and Russian authorities registered the explosion. The United States is investigating the information. 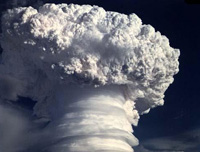 The state-run news agency reported that the new nuclear test inspired the population of the country to new achievements in labor.

“The successful nuclear test inspires our army and our people in their 150-day struggle for new economic achievements and strengthens the atmosphere of new revolutionary rise for building the new prosperous superpower,” the report from North Korean News Agency said.

South Korean seismographs registered the artificial 4.5-magnitude quake which testified to a possible nuclear test in the neighboring state. The President of South Korea called an urgent meeting of his ministers to discuss the latest events in North Korea .

Russian seismologists also registered a 5.5-6 magnitude quake in North Korea. Tectonic cataclysms were registered at the depth of ten kilometers. Russian specialists say, though, that such earthquakes are typical of North Korea.

The single missile with a range of 130 km (81 miles) was fired from the Musudan-ri launchpad on North Korea 's northeast coast, South Korea’s Yonhap news agency reported. North Korea previously used the site a month ago when it launched a rocket with a satellite on board. The rocket subsequently crashes into the ocean.

North Korea conducted its first nuclear test in October 2006. Russia immediately said that North Korea must come back to the Non-Proliferation Treaty and resume the six-sided talks regarding its nuclear program.

The Primorye Region in Russia’s Far East is the only region of the Russian Federation which borders on North Korea. The border is 18 km long. All special services of the region were monitoring the situation in October 2006, after the first nuclear test in North Korea. There was no increase in the radiation level registered.

The Japanese government will most likely demand an urgent meeting of the UN Security Council be held. South Korea and Japan believe that the Council must have a quick reaction to the second nuclear test. Most likely, Japan will seek more sanctions against North Korea .