The presidential election in Moldavia has not taken place. Opposition deputies from Our Moldova Alliance, the Liberal-Democratic Party and the Liberal Party refused from the voting and left the parliament. 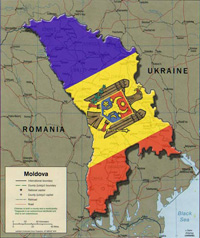 Moldova is a parliamentary republic which has its own peculiarities. Unlike, for example, Israel, where the prime minister acts as the head of state, Moldova has the hybrid system of power. The president – the leader of the nation – is elected by the deputies of the parliament. Sixty-one of 101 votes are enough to consider the election valid. The communist party holds 60 deputy mandates, but they failed to win only one vote to nominate their presidential candidate.

Opposition deputies strongly refused to vote for communists’ representative Zinaida Grechanaya. Her candidacy became a challenge for the opposition of Moldova. The former president of the country is half Moldovan and half Russian, whereas Grechanaya is Russian by nationality. It was absolutely unacceptable for the opposition to let a full-blooded Russian individual rule the country for the forthcoming four years.

The political situation in Moldova is extremely intense. When communists won the parliamentary elections in the beginning of April, opposition attempted to organize a coup in the country as they occupied several governmental buildings in Moldova’s capital, Chisinau.

The coup did not take place. Outgoing president – communist Vladimir Voronin – accused Romania (a EU member) of the attempted coup. Romanian flags were seen in the stormed buildings. Strange as it may seem, the European Union, which usually reacts immediately to any forms of violence against democratically elected governments, did not say or do anything about the events in Chisinau.

The current political situation in Moldova does not promise any change for the better. If the second vote fails too, the nation will have to hold the new parliamentary elections, but the government will not be able to fund the vote.

Vladimir Zharikhin, the deputy director of the Institute for the CIS, told Pravda.Ru that the two feuding parties were interested in holding the new elections to the parliament.

Moldova has virtually collapsed. The collapse happened mostly because of the actions of the European Union, which was trying to expand its territory to the detriment of the interests of other nations.

It is worthy of note that Romania continues to issue Romanian passports to Moldovans. The latter use their new passports to travel to other countries of the European Union for earnings. Furthermore, Romanian President Traian Basescu refused to sign the Border Treaty with Moldova on May 15. Basescu said that the treaty would legalize the Molotov-Ribbentrop Pact, which Germany and the USSR signed to split Romania and hand the Moldavian part of the nation to Moscow .