A campaign for high morality among policemen was launched in Peru. The head of the nation’s Interior Ministry Mercedes Cabanillas initiated amendments to the police regulations directed at cleansing the police of gays and adulterers. It is an interesting decision; it will surely have followers in other countries. But it seems insignificant against the background of Peru’s national poverty and complicated relations with Bolivia and Venezuela. 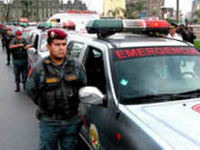 According to the decision made by the chief of the Peruvian police, homosexuals may not serve in the police. She supposes that such policemen evoke an ambiguous reaction in the local society and thus do irreparable harm to the reputation of the department.

Policemen caught in adultery will not be spared either. However, it is not mentioned in the decree if these measures concern men only. It is not clear either whether the term “adultery” applies to people living in an informal marriage. Along with homosexuals and adulterers, the decree concerns strike instigators. It is strictly forbidden in Peru (as well as in most countries of the world) for policemen to go on strikes.

It is worthy of note that Mercedes Cabanillas has been reputed as a politician capable of making tough and uncommon decisions. Local mass media even dubbed her “the Peruvian Margaret Thatcher” remembering how the former British Prime Minister made no concessions to unions and tried to suppress all strikes with an iron hand in the 1980s.

There's no denying that Cabanillas is original. For instance, she decided to dismiss all men from the traffic police of Lima in March. Now only women are on duty on the streets of the Peruvian capital. In Cabanillas’ opinion, replacing men with women can help reduce bribery, for “a research revealed that they take less bribes than men do”.

There is only one man left in the local traffic police – the head of the department General Arturo Davila.

The new decree of the head of the Interior Ministry will be liked in the country. Moral standards are very puritanical there unlike in neighbouring Brazil where people dance half-naked during carnivals. Genuinely religious Indians accepting no homosexuality comprise almost a half of the Peruvian population.

As a matter of fact, Peruvian authorities have much more serious problems. The country with the 28-million-strong population is far from being wealthy even by Latin American standards. The majority of its population lives below the poverty line. The unemployed comprise about ten percent of the population.

A considerable part of the rural population lives in the mountains at a height of more than 3,000 meters above the sea level. There are usually no roads, no sewerage and water supply systems, no gas and no electricity there. The same situation is in the east of the country – in Amazonian forests. That’s why building roads and installing electricity in remote villages seems to be a more important task than striving for high morals in the police.

It goes about the events of October 2003, when former President of Bolivia Gonzalo Sánchez de Lozada ordered to suppress a protest rally of the poor in a Bolivian city of El Alto. Sixty-seven men were killed in clashes. Soon Lozada fled to the USA where he was granted political asylum. Three of his associates settled in Peru . A trial against all four begins on 18th May.

Thus, Peru may eventually develop very complicated relations with two countries of South America at once. Peru’s relations with Ecuador are difficult as well. Therefore, fighting homosexuals in the Peruvian police does not seem to be urgent at all in comparison with problem of poverty and complicated international relations. Still it was an interesting decision that is likely to find many followers.