A 'war party' inside NATO does not want to let the partnership between Russia and the North Atlantic Organization happen. Moreover, this party plots against the US President who strives to reset the relationship between Washington and Moscow, Russia's Ambassador to NATO Dmitry Rogozin said. 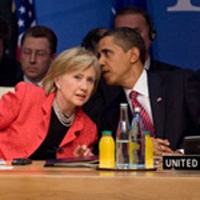 Rogozin is sure that this 'war party' masterminded the expulsion of two Russian diplomats from Brussels.

“Someone wanted to push Russia towards making tough measures. They wanted to trigger an international scandal, but Russia is not playing these games,” he said.

Rogozin presumes that there are officials the Alliance who are highly discontented with the policy of the new American leader.

“The USA is now forming a new team. They are selecting new foreign affairs staff and new negotiators. There are people who received their posts under the previous administration, and they still adhere to the principles that they were following in the past. We regard a plot inside the North Atlantic Organization against Obama as conceivable” Dmitry Rogozin said.

Rogozin supposes that the difficulties in relations between Russia and NATO are connected with “two mutually exclusive concepts that coexist in the heads of NATO strategists”. The first concept is to play the role of an international policeman. The second one is to defend collectively against a specific enemy. In the first case, the role of an enemy is played by international terrorism, but the second concept needs a more “palpable” enemy.

“This “bugaboo role” was previously played by the USSR, now Russia must play it according to the second concept. So, any improvement of relations with Russia will damage the second project”, the official said.