Israel can be deprived of Jerusalem. The world’s leading countries are trying to solve the crisis in the Middle East against the background of yet another conflict between Palestine and Israel. Arab countries are about to convince Israel ’s major ally – the USA – to approve the Saudi initiative, in accordance with which Israel will no longer have Jerusalem. 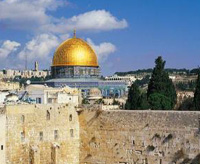 Russia’s Foreign Minister Sergey Lavrov arrived in New York today to discuss the Palestinian problem at the UN Security Council. No one expects any miracle to happen, of course. It is absolutely impossible to solve all problems, which Arabs and Jews have.

Saudi Arabia suggests Israel should give the holy city of Jerusalem under external control and set its state borders in accordance with the map of 1967. The Arab districts of Jerusalem – the eastern part of the city – will have to become the capital of the Palestinian State, Arabian officials suggest.

Official spokesmen for Arab countries, including the leader of the Palestinian Authority Mahmoud Abbas, try to convince President Obama of the need to implement the Saudi initiative. The landmark decision can be made during a special conference for the Middle East, which is taking place in June.

The Israelis traditionally believe that their capital is the city of Jerusalem, not Tel Aviv. Making the holy city become the capital of Palestine would be a disaster for the national mindset of Israel. In other words, it would mean a capitulation.

In the meantime, Israel and Palestine continue to attack each other. It goes without saying that Israel is not going to sit on its hands and watch Palestinian Qassam rockets hitting target one after another. Israel’s Cast Lead Operation did not reach its goals, and terrorists continued to attack Israel.

The sitting Israeli administration does not even think of giving Jerusalem away to Arabs. Israel would rather repeat the military operation against Palestine to minimize the terrorist threat.