Panic in the Pentagon: The Taliban may obtain nuclear weapons

At the end of April, the American establishment was anxiously watching the redeployments of the Taliban movement, the fighters of which are now within about 100 kilometers from Islamabad. If the Pakistani army does not stop the Talibs, they will be able to seize the nuclear arsenal of the country in about two weeks. 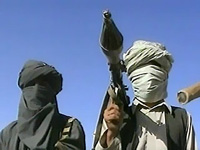 Panic in the Pentagon: The Taliban may obtain nuclear weapons

General David Petraeus, the head of the U.S. Central Command, reported at the closed meeting with US congressmen and senators that it would be clear in the next weeks whether the Taliban could overthrow the Pakistani government. According to GZT.ru, which quotes FoxNews and The Daily Telegraph, the General said that despite the excuses from the Pakistani authorities he hoped that they would strike a shattering blow on the Taliban’s positions.

Petraeus supposes that Islamad has taken the necessity to eliminate the threat from the Taliban and Al-Qaeda extremists, which are based in the northwest regions of Pakistan, seriously at last.

If we believe the Washington insiders, General Petraeus and other top-ranking officials of Barack Obama’s administration deem that the Pakistani army under command of General Ashfaq Kayani takes a more correct stand than the civil government.

The divisions of the Pakistani security forces have lately done their best to push them back having seized the control over the strategically important stations in the Buner Valley . However, the Talibs have put up a stubborn resistance and captured tens of policemen and soldiers.

U.S. Secretary of State Hillary Clinton stated last week that the United States could not let the Pakistani government under the President Asif Ali Zardari be overthrown by the Taliban. “In this case they will get the key to the nuclear arsenals of Pakistan. The consequences will be unpredictable. We just cannot let it go on”, she said.

The anxiety, with which the US officials follow the developments in Pakistan, is growing stronger because of the discord in Washington on the subject of which is the best way to help Pakistan. Some congressmen and senators suggest imposing strict limits on any supporting deliveries to Islamabad , though the members of Obama’s administration do not approve it. Others insist that the control over the main financial flows should be transferred from the Department of Defense to the Department of State, though this idea has no advocates in the White House.

According to FoxNews, no one in the US is aware of what the Taliban really strives for. The Washington-based experts do not know, whether the Talibs want to overthrow Zardari’s government or if they just try to win back a piece of the Pakistani territory, on which they could feel safe, impose Islamic laws and plan strikes on outer targets.