The USA does not invite other countries to participate in the discussion of the new Strategic Arms Reduction Treaty with Russia. The number of nukes that other countries have pales in comparison with the nuclear arsenals of both Russia and the United States, of course, but those countries are not going to cut their nuclear forces anyway. It goes about the USA’s NATO allies – Great Britain and France , which intend to modernize their nuclear arsenals. 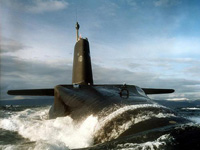 The document on Britain’s defense policy appeared in London in 1998. The document says that Britain’s nuclear deterrence was the basic security control principle of the nation. The British are not going to coordinate the capacity of their arsenal with other members of the nuclear club.

The approach was developed in the beginning of the 1990s, when London began to renew its strategic nuclear arsenal, particularly the fleet of its nuclear-capable submarines. The fleet includes four Vanguard subs with nuclear missiles on board. Each of such submarines has 16 US-made Trident-2 ballistic missile launching systems. Britain has purchased 58 Trident-2 systems from the USA in total.

The British authorities said in July 1998 that it was not going to have more than 200 nukes. Britain intends to maintain its nuclear fleet before 2020-2025. The UK considers an opportunity to replace its nuclear-capable subs with Astute class submarines equipped with Tomahawk cruise missiles.

The military doctrine of another member of the nuclear club – France – is based on the strategy of intimidation and deterrence. France modernizes its nuclear arsenal too. Being a founding nation of the European Union, France is going to include its own nuclear program into the general defense policy of the Union . Such an approach can be seen in the French defense program for 2003-2008.

France currently has four nuclear-capable submarines, each of them having 16 missile launch systems. Each missile is outfitted with six TN75 nukes. The fleet has 64 launch systems in total – all of them can fire 384 nukes at a time.

The air component of the French nuclear forces constitutes of two types of aircraft: 60 Mirage-2000H bombers and 24 deck-based Super Etendard bombers deployed on board The Charles De Gaulle aircraft carrier.

The planes are outfitted with ASMP cruise missiles. The French defense doctrine does not exclude the use of the French nuclear forces in cooperation with the United States and Great Britain.

France will start to rearm its strategic nuclear forces at the end of 2010. The national army will obtain new submarines that will be able to fire ballistic missiles at a distance of up to 8,000 kilometers.

France also intends to obtain new Rafale fighter bombers for its Air Force. The aircraft will be outfitted with enhanced ASMP-A cruise missiles that will be capable of striking targets at a distance of up to 500 kilometers. Therefore, the French nuclear-capable aviation will have 84 aircraft with 84 ASMP and ASMP-A nuclear cruise missiles.