Israel’s independence based on 61 years of never-ending wars

Israel celebrated the 61st anniversary of its independence on April 29. The country has been waging wars throughout all these years. Violence remains strong in the region for over 60 years already, and there is not even a glimmer of hope for better times. Arabs perform terrorist acts, Israelis respond with military attacks. New explosions and new military actions continue to occur. Each side in every conflict has its own excuse, no one is ready to make concessions. 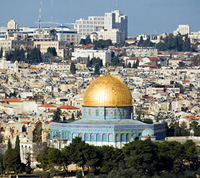 Israel’s independence based on 61 years of never-ending wars

Israel has been waging wars all the time explaining them with a need to defend its territory. Arabs are certain that Israel captured foreign territories. As a result, bloodshed continues for 60 years.

Arabs used to make two-thirds of the population of Palestine after WWII, whereas Jews made up a third. Britain used to govern Palestine, but decided to decline the mandate in 1947. The US decided to split the country into Jewish and Arab states. The majority of Jews rejoiced at the news, although Arabs regarded it as a violation of their national rights.

The first Arab-Israeli war began as soon as the creation of the Jewish state was announced in May 1948. Arab countries tried to prevent the strengthening of Israel, but suffered a defeat in the long run. The fire was ceased in May 1949 after Israel had captured 80 percent of the Palestinian territory.

The Arab state never emerged in the region. The territory, where the country was originally going to appear, was handed over to Syria, Jordan, Lebanon and Egypt. Israel became a UN member in May 1949, although Arab states did not recognize the new country. They still don’t.

Over a million of Arabs fled from the occupied territories. The events became known in the Arab world as ‘al-Naqba’ (‘The Catastrophe’). That was how the problem of Palestinian refugees appeared: many of them still dream to return to their motherland, although the fact of Israel ’s existence is the only obstacle that those people have.

The next war in the region broke out in the fall of 1956. Israel joined Britain and France in an effort to retrieve the control over the Suez Canal that was nationalized by Egypt. Israel seized the Sinai Peninsula, but was forced to retreat under coercion from the USA and the USSR.

Egypt, Syria and Jordan deployed their troops near Israeli borders in June 1967, which gave Israel the reason to launch the preventive war. The war became history as The Six-Day War. Israel captured the Sinai Peninsula, the Gaza Strip, the West Bank of Jordan, the eastern part of Jerusalem and The Golan Heights. Jewish settlements began to appear on the occupied territories, which added even more fuel to the fire.

Egypt and Syria attempted to retrieve their territories in the fall of 1973. Fierce battles took place, but the situation did not change a bit. Israel later delivered the Sinai Peninsula to Egypt due to the pressure from the international community.

Israeli Air Force bombed a half-constructed nuclear reactor in Iraq on June 7, 1981. The UN Security Council condemned the actions. Israel interfered into the Lebanese Civil War to destroy a base of the Palestine Liberation Front in 1982.

Violence did not stop. The second Intifada broke out in 2000 and continued for eight years. Over 5,000 Palestinians were killed during that time, whereas Palestinian terrorists killed hundreds of civilians.

Israel’s biggest problem to date is connected with the Gaza Strip. Israel had to withdraw its troops from the territory in 2005. Hamas militants came to power there in 2007.

It is hard to find any other country that would be waging so many wars with its neighbors for so many years. Israel is guilty of many of its problems; Palestine is not innocent either.