Swine flu contributes to collapse of world economy even more

Mankind has finally become aware that the financial crisis is not the most dangerous thing in the world. The world has come across a new danger – the swine flu virus. Many explain yesterday’s reduction of stock markets with the threat of the epidemic of the new disease. The struggle against the distribution of the new virus has made a number of countries ban the imports of pork. Russia introduced a ban too. 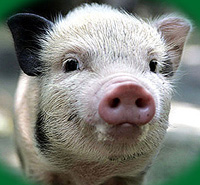 Swine flu contributes to collapse of world economy even more

Russia will not suffer from a shortage of pork. The cattle-breeding industry in the country still shows positive indexes despite the crisis.

Swine flu has become the most talked-about subject in only a couple of days. This disease was originally discovered during the 1970s, although it was believed that the virus was not dangerous to humans. However, a year-old child died of the disease in China in 1999.

Three incidents of the infection when the virus was transmitted to humans were reported in 2007 in the USA. This year the epidemic has taken a new international scale. The first incidents were registered on March 18 in Mexico.

Over 1,600 people have been infected with swine flu so far, over 100 people have already died of the infection. Infective episodes were reported in the USA, Spain and Canada.

Experts say that the new epidemic will slow down the USA ’s extrication from the crisis, which will automatically prolong the crisis in the rest of the world.

The epidemic may instantly destroy the glimmers of hope that have recently appeared in the United States at such heavy costs. The threat of the epidemic, the pesthole of which is located in Mexico, will inevitably affect the precarious consumer confidence which has just begun to recover in the country, analysts say.

A state of emergency push the government of the USA and other countries to take a series of measures that do not come together with the policy to boost the home demand.

If the epidemic continues to develop, there will be tough measures taken to restrict the movement of the labor force. A serious decline in the tourist industry in the countries of the American continent is also likely to occur.

It is worthy of note that the losses of the world economy from the previous global epidemic (bird flu) are evaluated at tens of billions of dollars.

A special governmental committee has been established in Russia to prevent the distribution of swine flu. The import of pork from the countries of the Caribbean region – Guatemala , Honduras , the Dominican Republic, Columbia, Costa Rica, Cuba, Nicaragua, Panama and Salvador – has been banned. The import of any type of meat and meat products from Mexico and three US states to Russia has been banned too.

The production of meat in Russia has grown by 8.7 percent in March of 2009. Therefore, the restriction of imports from Mexico, the USA and the Caribbean region will not affect the meat market of the Russian Federation.

To crown it all, the World Health Organization says that it is impossible to catch the infection via food. There has been no evidence found to prove the presence of the virus in pork.