The monument of Bronze Soldier of Tallinn was dismantled in Estonia two years ago. The government of the former Soviet republic has made quite a number of actions to glorify Nazism since then. This country has become particularly distinctive in terms of its strong anti-Russian sentiments. An Estonian publication even said once that “a good Russian was a dead Russian.” 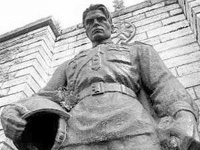 The dismantling of the monument, which was erected in the country’s capital in memory of the Soviet soldiers who died defending Estonia against Nazism, ruined the relations with Russia. Estonia’s stubbornness affected its economy after Russia turned its back on the country. It is quite possible that the glorification of Nazism is exactly the reason why the economic crisis has become especially strong in Estonia.

The monument was relocated on April 26-27, 2007 overnight. The Bronze Soldier used to stand on the grave of 13 soldiers who died in September 1944 in battles for Tallinn. The Estonian government made the decision to remove the monument in the endeavor to get rid of the symbols of the Soviet past. However, the monument was cherished by the Russian-speaking population of the country. Many people took to the streets expressing their protests against the blatant decision of the irresponsible Estonian authorities. One person died and hundreds others were arrested during the riots that night.

Russia harshly condemned Estonia’s actions. However, the EU, NATO and the USA either directly supported the country’s administration or preferred not to say anything at all.

Three months later, Estonia’s Justice Minister Rein Lang celebrated his 50th anniversary in a restaurant, the interior of which was adorned with Nazi swastikas. The event sparked an international scandal between Estonia, Germany and Austria, which subsequently led to Lang’s dismissal.

Estonia’s publishing house Grenader released a 2009 calendar in the fall of 2008. The calendar contained 12 images of the WWII era. The 12 posters encouraged everyone to join Estonia ’s 20th SS division. Many monuments to victims of Nazism were vandalized in the country on a number of occasions. A man named as Martin Hanson wrote in a local culinary journal that “a good Russian is a dead Russian.” No one has ever been punished for any of the above-mentioned actions.

A Russian-language newspaper was closed in Estonia on April 20 of this year. The newspaper’s editor said that he had to close the paper over the pressure from the Estonian media.

Russia cut the transit transportation of its cargoes via Estonian ports in response to the country’s anti-Russian actions.

“The sacrilegious action to dismantle the monument to the Soviet warrior produced a painful reaction in the Russian society, including the business circles. As I think they have a right to make their own decisions regarding the choice of partners in accordance with their feelings and understanding of justice,” Russia ’s Foreign Minister Sergei Lavrov said.

The reduction of the commodity circulation with Russia has made a huge hole in the budget of Estonia. The country lost at least 320 million euros in damages in 2007 because of the relocation of the Soviet monument. Nowadays, the Estonian government is trying to save its nation from bankruptcy.