Condoleezza Rice can go on trial for her tortures

Barack Obama’s recent initiative to expose the information about CIA’s secret torture chambers has come into effect already. As it turned out, the information is directly connected with a person from the previous US administration. It goes about Condoleezza Rice. As National Security Advisor in 2002, Rice gave her personal approval to water tortures. 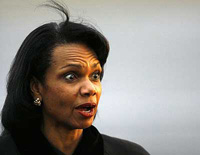 Condoleezza Rice can go on trial for her tortures

The documents, which the Senate Committee for Intelligence declassified, showed that Rice approved this form of torture to al-Qaeda suspect Abu Zubaydah. The agreement to waterboarding was given verbally. The committee provided a detailed report of how the subject of tortures was discussed at the Bush’s administration.

It is worthy of note that Condoleezza Rice previously testified to the Senate about the role of the White House in the tough measures taken by the CIA. The new details demonstrate that Rice was personally involved in approving the tortures.

US President Barack Obama considers a possibility to call former officials of the US Department of Justice into criminal account for their decisions, which entitled CIA agents to torture terrorist suspects. It will soon become known whether the former Secretary of State will be put on the list or not.

It is also interesting if Rice is going to tell the true story of her implication in CIA tortures in a book of her memoirs that she intends to write. The first volume of her memories is to be published before 2011.