Russian Minister for Foreign Affairs, Sergei Lavrov, is visiting the Korean Peninsula April 23 to convince the two Koreas to bury the hatchet and refuse from the bellicose rhetoric. First and foremost, it goes about North Korea that has been frightening the world with its nuclear program for years now. Russia is especially concerned about the state of affairs on the peninsula because the situation is unfolding near the Russian borders. 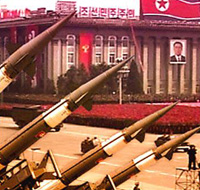 Sergei Lavrov will visit both South and North Korea within the scope of his visit to the region. The situation on the Korean Peninsula continues to aggravate and became especially dangerous in August 2008, when North Korea used the world attention to the war in South Ossetia to announce its intention to pull out from the non-proliferation regime.

The state of affairs became even worse in February of the current year, when Pyongyang announced an intention to launch the first NKorean space satellite. South Korea, Japan and the United States immediately said that NKorea was most likely working on a test of its medium-range ballistic missile, Taepodong-2.

The widely expected event took place on April 5: the missile fell down into the sea soon after launch. Nevertheless, the fact that either a missile or a peaceful satellite disappeared in deep blue sea for good has not improved the situation.

Afterwards, North Korea announced that it was terminating the previously achieved agreements about the decision to scrap its nuclear program. The leadership of the isolated nation also asked IAEA experts out.

Officials of the two Koreas held their first negotiations in 12 months on April 21. The talks lasted for 22 minutes and were held in the form of ultimatum exchange. North Korea demanded the anti-communist propaganda be stopped, whereas South Korea insisted its northern neighbor should put an end to the practice of intimidation.

On April 22, North Korea accused its neighbor of breaking the line that separated the two Koreas like a border after the truce of 1953. NKorean officials referred to the action as a serious military provocation which could entail a military action between the two countries.

As a matter of fact, the two countries are in a state of war still – the peaceful agreement has never been signed. Military clashes between the Koreas occurred on a regular basis after the end of the Korean War (1950-1953).

In 1968, North Korean troops seized a US secret reconnaissance vessel and conducted a successful attack against the SKorean governmental residence.

Pyongyang’s only goal is to demonstrate its power to the world, especially to the United States, to be able to extort other countries.

In 2007, Pyongyang said that it was going to close its nuclear objects. However, the money, food and fuel, which the nation previously received from the international community, is no longer available, and the country has to use its nuclear myth again.