The Black Book carries heavy truth about the Holocaust

The world commemorated the victims of the Holocaust on April 19. It may seem at first sight that it was only German Nazis that exterminated whole nations. However, Nazis had many allies from Western Ukraine and the Baltic States. That is why, the dispute about the life of Ivan Demyanyuk, a Ukrainian national, accused of slaughtering thousands of Jews, surprises only those people who lack knowledge on history. 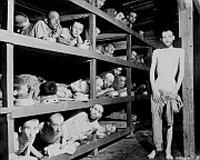 The Black Book carries heavy truth about the Holocaust

The story of Ivan Demyanyuk became another proof of the fact that Hitler had many followers among people of other nationalities. For example, over 25,000 Jews were killed in Yasenovats concentration camp in Croatia. Romanian dictator Ion Antonescu is also responsible for the Holocaust (he ruled the country from 1940 till 1944). He personally ordered to slaughter 35,000 Jews in the city of Odessa in 1941. Ukrainian and Estonian SS legionaries took an active part in the extermination of the Jews too.

The Black Book by Ilya Erenburg and Vasily Grossman was published in Israel in 1980. The book tells of the crimes that Nazis committed on the occupied territories. The book became available to many only after the break-up of the USSR. The authors were accused of focusing their attention on the traitors among Ukrainians, Lithuanians and people of other nationalities.

There were many subjects to write about. The nationalists’ brutality would astonish even German Nazis. Documents say that Lithuanian partisans used spades to slaughter little children.

One should have a look at Simon Wiesenthal Center’s list of nine most wanted Nazis. The list includes only one German! There are two Hungarians, Croatians and a Dane. Two others are Estonians, there is also Ivan Demyanyuk, a Ukrainian, and Algimantas Dailide, a Lithuanian.

Wiesenthal included Estonia on the list of the countries that took insufficient effort in disclosing former Nazis after the country found nothing suspicious in the biographies of those Estonians included on the Center’s list. The list of those countries continues with Ukraine, Croatia and Australia, where many war criminals found shelter.