The release of Richard Phillips, the captain of the pirated Maersk Alabama, has become the best Easter gift for his family. It became another reason for all Americans and President Barack Obama to demonstrate their power to the whole world. 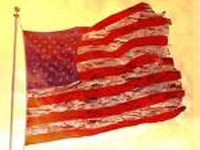 However, the return of the captain and his crew does not mean that America keeps its leadership in the world. Quite on the contrary, it shows that the USA has been losing it.

US troops are deployed in 153 out of 192 countries recognized by the United Nations, The Guardian wrote. The White House still spends too much on defense. The US Air Force and the US Navy do not wish to part to their nuclear warheads even now, 20 years after the collapse of the Soviet Union.

It will be eight years this autumn since the US incursion in Afghanistan and six years since their invasion of Iraq. It is longer than the time when US troops participated in WWI and WWII.

US troops had to face the guerrilla warfare in Iraq and Afghanistan, and they are still unable to overcome it. The guerrillas enjoy the support of the local population in the two war-torn countries.

The usual tactics – the bombing of villages – does not bring any results. Now the USA can launch the anti-piracy operation off the Somali coast. The need of this operation demonstrates the uselessness of the US-led struggle against international terrorism.

Any great world power could conquer Somali with the use of only several battalions within several weeks only, which is unachievable now, because Somali as a state stopped its existence 20 years ago. No one is capable of establishing law and order there.