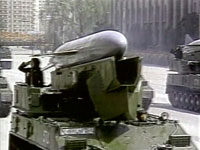 "We can only regret North Korea's decision and call on her not to leave six-party talks on the nuclear problem of the Korean peninsula," RIA Novosti quoted an unnamed ministry official as saying.

North Korea's Foreign Ministry said in a statement that it "resolutely condemns" the action by the United Nations, which it said "rampantly" infringes upon the country's sovereignty and "severely debases" the people's dignity.

"We have no choice but to further strengthen our nuclear deterrent to cope with additional military threats by hostile forces," the statement said.

The statement also said that "six-party talks that we are taking part in are not necessary any more."

Those negotiations, which also involve China, Japan, Russia, South Korea and the United States, began in 2003 and have been aimed at achieving North Korea's denuclearization.

The North also said it will restore nuclear facilities it has been disabling in line with an international disarmament-for-aid deal negotiated under the six-party process and resume operating them.

The statement was the country's first reaction to the Security Council's unanimous condemnation Monday over the April 5 rocket launch, which Pyongyang says sent a satellite into space but critics say tested long-range missile technology, the AP reports.

Japanese Ambassador to the UN Yukio Takasu and U.S. Ambassador Susan Rice said they would quickly submit proposed lists of “goods and entities” to be subject to the 2006 sanctions, Bloomberg reports.

“As the country most threatened by the recent launch, Japan is very pleased the Security Council has adopted unanimously a very strong presidential statement,” Takasu said.

White House spokesman Robert Gibbs said in a statement that President Barack Obama applauded the “clear and united message by the United Nations Security Council condemning North Korea’s recent launch” of its missile, “confirming that it violates international law and would result in real consequences for North Korea.”

Gibbs also said, “The international community is united in demanding that North Korea abandon its pursuit of weapons of mass destruction and their means of delivery, and that it refrain from further provocations.”