According to the analysis that the ministry conducted based on data from the U.S. military and other sources, the missile launched from the Musudan-ri site in northeastern North Korea fell in waters between 2,150 kilometers and 2,950 kilometers east of Chiba Prefecture. The splashdown point was within an area measuring 800 kilometers east to west and 160 kilometers north to south. 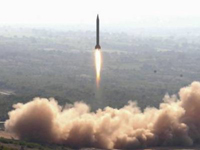 New details emerging from the analysis of data from North Korea's April 5 Taepo-Dong-2 test indicate the vehicle flew successfully several hundred miles further than previously believed and used more advanced steering than has been demonstrated by the North Korean's before.

The rocket impacted as far as 2,390 miles from the launch site as opposed to about 1,900 miles as earlier announced by the U. S. and Japan.

It also temporarily flew in space before failing and dropping back into the atmosphere at relatively slow speed that enabled debris to survive till impact rather than burning up.

Earlier it was believed that the second stage had failed early in its burn.

The rocket also demonstrated more advanced steering and other advances that could enhance its deployment as a silo-based ballistic missile.

The Japanese Ministry of Defense and U.S. Defense Dept. now believe that the second stage of the rocket performed as planned rather than failing early in its flight phase.

The bottom line is that the North Korean vehicle flew as much as 500 miles further over the Pacific toward Hawaii than U.S. and Japanese forces had announced initially.

The new data now indicates that the second stage fell in the impact zone the North Koreans had earlier warned shipping and aircraft away from, instead of falling short of that zone as earlier indicated by the U.S. and Japan, spaceflightnow.com reports.

The vehicle's second stage uses a Scud-ER (extended range) rocket engine that employs "step-throttling" in its propulsion to stretch the second stage burn duration to gain range and velocity.