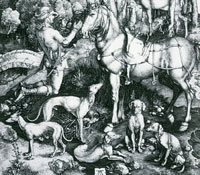 Hungarian archeologists found the burial ground of 25 dogs on the outskirts of Budapest. Over 1,300 animal bones were found during the excavation of the medieval town of Kana. The remains are dated of 10th-13th centuries.

Marta Daroczi-Szabo of the University of Budapest, believes that the residents of Kana were practicing more than just one religion. The Hungarians were converted to Catholicism in the year 1000 and they were not allowed to practice pagan sacrifices.

However, the people continued to worship dogs as holy animals. Daroczi-Szabo, the chief scientist in the study, discovered that the adult canines were buried in special graves. Four puppies were put to rest in clay pots. The dog cemetery was placed next to the human burial ground.

Historians say that dogs used to be worshipped as live mascots, which protected people against the powers of evil. The Hungarians also believed that dogs symbolized faithfulness and helped overcome envy, Infox.ru reports.

About ten canine skeletons were found in the basements of the buildings of Kana. The practice was typical of Europe: people used to brick up cats and pour chickens’ blood on the floors of their new houses.