U.S. states start to print their own currencies

Many U.S. communities are creating their own currencies now. They try to help consumers and companies to fight the global financial crisis and the recession. 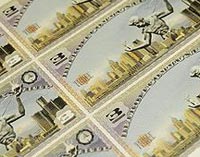 U.S. states start to print their own currencies

The idea, borrowed from the Depression era when the currencies were known as "scrip", is designed to boost local spending and keep money circulating within the community.

Typically, a group of businesses print a new currency which shoppers can then buy at a discount – typically one dollar will cost 90 to 95 cents – and spend at full value with participating companies.

Some of the currencies have been around for years but the recent economic downturn has encouraged others to follow suit. According to some estimates, there are now more than 75 local currency systems across the country.

Others include the Ithaca Hours in upstate New York and the Plenty in North Carolina.

Under US law, small communities can produce their own currency so long as it does not include coins and does not resemble federally-issued money.

The currencies are not a tax dodge as the income to participating businesses is liable to tax.

In Traverse City, Michigan, more than 100 businesses accept Bay Backs, among them restaurants, B&Bs, a doctor, accountant and even a tarot card reader.

Around $2 million worth of BerkShares – the most established local currency – is circulating in the Berkshires, a rural area in southern Massachusetts, telegraph.co.uk reports.

The beautifully-illustrated notes portray local "heroes", including the author Herman Melville, the artist Norman Rockwell and a tribe of Mohicans.

A good example of local currency at work is an experiment done in 1930’s in the city of Worgl, in Austria. It was time of the Great Depression; the small town of 4000 people had unemployment of 30%, with huge local government debt. In 1931, the city major ordered printing of 32,000 labor certificates, that carried a negative 1% monthly interest rate and could be converted into the Austrian currency at 98% face value. The new currency restarted a number of public projects mostly involving infrastructure and within a year the revenue of the local government rose from 2,400 AS (Austrian schillings) to 20,400, while the unemployment was virtually eliminated, all with no increase in prices. With the rest of Austria still gripped by the economic downturn, other communities followed with installing local currencies.

Naturally the socialist party of Austria wasn’t satisfied with the program and neither was the Austrian central bank, afraid of losing power over currency. As a result, the experiment was shut down, the unemployment went back up and the local economy caught up in deterioration with the rest of the country, examiner.com reports.

Local currency, on a much larger scale, is currently at work in the European Union. There are several countries within the Union that still use their own national currencies instead of Euro – the official currency in EU.