A compromise, the American style, became the main result of the G20 summit in London. The world’s leading countries decided to boost the world economy with the help of grand investments, which goes along the US model of the anti-crisis struggle. Such an approach may result in the loss of control over the situation, economists say. The United States and Great Britain solve their own problems first and foremost. 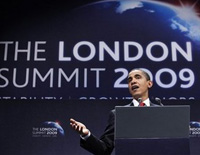 The leading countries of the world achieved “almost a historic compromise” as a result of the G20 summit, as German Chancellor Angela Merkel put it. The twenty countries, which make up to 80 percent of the global GDP, gathered in the British capital to solve the future of the world financial system.

Many analysts said that they were not expecting any landmark decisions to be made because of the considerable differences between the participants of the summit. US President Barack Obama and British Prime Minister Gordon Brown insisted that only considerable investments in the international economy could save it from decline.

France and Germany did not support the idea. The two countries believe that the solution of the problem lies in the reforms and tough regulations of the whole international financial market. Yet, the USA and Britain were not willing to give more market-regulating powers to financial structures.

In addition, France stood up for sanctions against offshore zones, where taxation can be avoidable. French President Nicolas Sarkozy even threatened to leave the summit if it was not going to bring any certain results.

China and Russia suggested the creation of new reserve currencies to avoid the US dollar peg, although the countries were not persistent in their proposals.

As a result, the summit members agreed to spend $5 trillion on the solution of current economic problems before 2010. British Prime Minister Gordon Brown said that the funds should help the economy grow by four percent.

"Today's decisions, of course, will not immediately solve the crisis. But we have begun the process by which it will be solved," Brown said.

It was originally reported that the amount of financial assistance would make up only $1 trillion, though. The world has thus made a choice in favor of the US strategy.

“America is the world’s leading country, which makes it impossible not to listen to what they say,” Aleksei Belyanin, an expert with the International Institute for Economy and Finance told Bigness.ru.

No one knows which decisions would be absolutely correct under the conditions of the current crisis. The world does not have an experience, which it could use in overcoming the crisis conditions. The world has no other way out.

The G20 also decided to make the list of ‘tax haven’ countries to struggle against offshore zones in which billions of dollars are kept out of reach. The members also agreed not to make bonus payments to top managers who resorted to governmental assistance over their critical financial condition of their companis.

As for the idea to create new reserve currencies, there were no decisions made on the matter. The issue, which Russia proposed, was not even listed on the agenda of the summit. The G20 only promised to give it another consideration some time later.