North Korea continues to make headlines all over the world with its vehement intention to launch a ballistic missile with a peaceful satellite on board. The government of the isolated country has prepared a nuclear present to its adversaries. It has recently transpired that Pyongyang has several nuclear warheads ready. 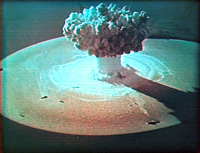 Daniel Pinkston, a senior analyst at the International Crisis Group, said that NKorea had built compact nuclear warheads, the technical details of which were not known yet.

US intelligence officers discovered in January 2009 that North Korea had used 30.8 kilos of plutonium to build several nuclear warheads. US experts said that the amount of plutonium was enough to make eight nukes.

The nukes are supposedly being stored in two underground storage facilities and would be used with No-Dong missiles the range of which reaches 1,300 kilometers. A special organization has been established in North Korea to service the nuclear forces. The organization is not included in the structure of the NKorean armed forces and is personally subordinated to Kim Jong-il.

Pyongyang officials said that North Korea would attack any country that would dare to down its peaceful satellite on board a ballistic missile. The satellite controversy testifies to the collapse of the six-sided talks on the nuclear disarmament of North Korea.

North Korea started developing its nuclear program in 1965, when the country launched a Soviet-made nuclear reactor. The country gradually began to use the reactor for military purposes. The USSR made North Korea sign the Non-Proliferation Treaty in 1985, although Pyongyang did not allow IAEA experts to control its nuclear activities.

North Korea does have a military nuclear program now. The country was also developing the production of ballistic missiles. In the winter of 1993, IAEA experts finally arrived in the country, although they were not allowed to access the two reactors for inspections. North Korea pulled out from the Non-Proliferation Treaty on March 12, 1993.

The UN urged the country to return to the treaty and continue to cooperate with the IAEA. North Korea gave its agreement in June 1993, but demanded the USA should stay away from the internal affairs of the nation.

Pyongyang has been misleading the international community during all those years. The country started making test launches of its ballistic missiles in 1998. The climax of the nuclear scandal was achieved in October 2006, when the nation tested a low power nuclear device. North Korea was developing the nuclear program presumably due to the actions of South Korea which was also developing a nuclear program. It became known in 2004 that SKorea was conducting uranium enrichment activities.

Pyongyang eventually agreed to scrap its nuclear programs in return to rice, fuel and financial assistance from the international community. North Korea even exploded its reactor. However, the nation has two others left. NKorea resumed the nuclear program in August 2008 – a ballistic missile is about to be launched.