France will pay the compensation to those who suffered in the nuclear tests from 1958 to 1998. It goes about both the military men, who participate in the tests, as well as the residents of the colonies, where the tests were conducted. First and foremost, it goes about the French Polynesia in the Pacific Ocean. Paris will have to make the compensations along with Washington and London – the USA and Great Britain also contributed to the pollution of the unique part of the world. 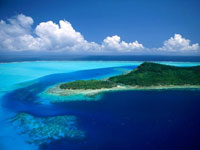 Paris started making the compensations to those who suffered from the nuclear tests in Algeria (1958-1962) and Polynesia (1966-1998) on March 26. France conducted 210 tests of nuclear weapons in total. One hundred and ninety-three nuclear explosions were made in Polynesia, the Pacific Ocean.

Algeria declared independence in 1962, which made France move its nuclear grounds from the country to a different location. They found such a location in Polynesia, which sparked protests in the countries of Oceania, New Zealand first and foremost. French special services had to deal with a strong resistance from Greenpeace. The troops even took down their vessel, The Rainbow Warrior, in 1985.

The nuclear tests were stopped after the incident of 1996, when a bomb detonated at a dangerously small depth.

England held 21 nuclear tests to destroy the Pacific corner of paradise. Twelve nuclear explosions were held in Australia during the 1950s. About 1,000 British military men, who participated in the nuclear tests, are also going to file for compensations. The participants of the tests from New Zealand and Fiji will most likely join them too.

Not less than 2,000 Polynesians, including 600 underage children, suffered from the explosions. About 15,000 civilians and military men can claim the compensations too.

The problem has a different side to it. When the nuclear test ground was closed in 1999, the Polynesians faced the unemployment problem. Paris has assigned ten million euros for the compensations. Some say that it is a humiliating dole. However, the funds will be added to $194 million, which France will pay to Polynesia for the nuclear tests in 1995-1996.

A Russian resident of the region, who wished to remain anonymous, told Pravda.ru that no one told the Polynesians of the danger of nuclear tests. Many of them swam in the ocean after the nuclear blasts, and no one tried to stop them.

It goes without saying that many of those, who suffered from radiation 40 years ago, have already died. Nevertheless, Nicolas Sarkozy’s initiative deserves the international support.