USA wants to be friends with Russia to destroy its weapons

US defense officials offer their friendship to Russia. They urge Russia to build the joint missile defense system, to cut the nuclear arsenal and not to pay any attention to the ongoing efforts of the States to grow the anti-missile potential. 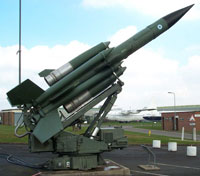 USA wants to be friends with Russia to destroy its weapons

Marine Corps General James E. Cartwright, vice chairman of the Joint Chiefs of Staff, offered Russia to cooperate with the United States in the creation of the joint missile defense system.

The statement, which Mr. Cartwright made on March 24, became a response to Moscow’s criticism of the USA’s missile development plans. An official spokesman for the Russian Foreign Affairs Ministry said that it was a single-handed initiative of the USA that was threatening the international security.

The US general believes that Russia and the USA have many directions to cooperate on in the missile defense field. The two countries, the general said, could start with exchanging the radar and satellite information about the launches of ballistic missiles in different parts of the globe.

According to Cartwright, the US administration is ready to decline the deployment of its missile defense system in Eastern Europe for that sake of that offer of his. In other words, the Pentagon intends to prove that it views Russia as its ally.

The US general believes that the development of the joint missile defense system will allow the two countries to react more effectively to future challenges. America’s potential enemies can use both ballistic missiles and other weapons in their future attacks. Cartwright said that conventional ballistic missiles became outdated, just like email correspondence did.

Russia and the USA share different approaches as far as missile defense is concerned. The USA’s Patriot missiles were designed to intercept ballistic missiles, whereas Russia’s S-300 systems were made to destroy cruise missiles.

It would be ridiculous to believe that rogue states possess a serious arsenal of ballistic missiles to attack the USA. The US missile defense system is aimed against Russia first and foremost. Will the USA use its missile defense system in the event an armed conflict occurs between one of its allies and Russia? It just so happens that the Pentagon wants to be friends with Russia in order to disarm our country.

The USA conducted a successful test of its THAAD complex. The Terminal High Altitude Area Defense is a United States Army project to develop a system to shoot down short- and medium-range ballistic missiles using a hit-to-kill approach. The missile carries no warhead but relies on the kinetic energy of the impact. THAAD was designed to hit Scuds and similar weapons, but also has a limited capability against ICBMs.