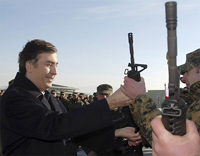 Strangely enough, the open statement made by Mamuka Kurashvili, a brigadier general of the Georgian army and the chief of a staff of peacekeeping operations in Georgia's conflict zones in Abkhazia and South Ossetia, on August 7, did not cause any worries. The European Commission paid attention to a TV interview, in which the Georgian general declared that the Georgian leaders had made the decision “to rebuild the constitutional order in South Ossetia.”

The war in South Ossetia began on August 8, 2008. The amusing fact is that subsequently Kurashvili justified his statement by saying that he had had a contusion.

However, the secret document published by German magazine Spiegel on Sunday was much more weighty evidence for the EU investigation. According to Spiegel, Kurashvili’s statement is literally contained in N2 order issued by the Georgian commanders-in-chief dated of August 7.

The document was intercepted by Russian secret services and delivered to the European commission.

The following are recent statements about the Georgian President made by Nino Burdzhanadze, the former Chairperson of the Parliament of Georgia.

Georgian President Mikhail Saakashvili “by his actions and policy has ruined his political career and destroyed the country,” Georgian ex-parliament speaker who quit in opposition Nino Burdzhanadze said in an interview published by the Tbilisi-based Rezonansi news paper on Monday. Burdzhanadze noted: “The sooner Saakashvili resigns the better both for him and for Georgia.”

The 45-year-old Burdzhanadze is regarded here as one of the real candidates for the post of Georgian president in the event of Saakashvili’s resignation. From November 2001 to May 2008 she was the speaker of the country’s parliament. Then she established the opposition party “Democratic Movement-United Georgia.” Burdzhanadze is one of the organisers of a mass protest action demanding Saakashvili’s resignation. The rally is planned to be held on April 9.