I think that the CO2-caused Global Warming theory is false and unproven junk science. 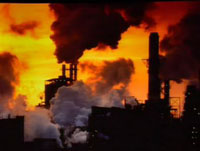 But let’s suppose for a moment that the CO2 equals Global Warming equation is real. The wealthy elitists James Hansen, Al Gore, Tony Blair, Barack Obama, and the other high-profile cheerleaders for CO2 reduction are asking the poor and middle classes to suffer the consequences of a radical shutdown of global commerce and energy production in order to ‘save the planet’ from Global Warming. They want to make serfs of the masses of working people, while a privileged elite will be permitted to continue living in high style with a much larger ‘carbon footprint’ than the un-entitled lower classes.

We should never let that happen. The only way that ‘carbon rationing’ should be allowed is by assigning the exact same carbon limit to all people everywhere. Al Gore, Barack Obama, a London cabbie, and a Kalahari Bushman should all be assigned exactly the same number of ‘carbon credits’, period. Let them trade their credits with each other, but everyone should be restricted to the same limited ‘carbon credit’ allowance. The long-term ultimate effect of this would be an economic leveling of society; essentially global Communism. Under such a system, no one would be able to accumulate an excess of personal property or wealth because they could never accumulate enough ‘carbon credits’ to do so.

When Hansen, Gore, Blair, and Obama give up their patrician incomes and lifestyles and restrict their own ‘carbon footprint’ to the level of the common labourer or office worker, I will begin to believe that they are sincere about preventing Global Warming. Their obvious unwillingness to do what they are asking the rest of us to do proves that they are not sincere. They want the common people to sacrifice their lives to prevent Global Warming, while the wealthy retain their high-carbon consuming and producing privileges.

We cannot permit a privileged elite to enjoy a ‘high-carbon’ lifestyle while the poor are restricted by law to a ‘low-carbon’ lifestyle. Any effort by any government to impose carbon rationing with preferential treatment to any class of people should be seen as sufficient reason for an all-out French-style revolution in which the majority population dispossess the elitists of their wealth, their positions of power, and their privilege. In a world that is constantly threatened by Global Warming, we cannot allow a greedy few to consume or produce in excess of the average ‘carbon footprint’ of the world’s population as a whole.

Barack Obama keeps the temperature at 78 degrees Fahrenheit in the Oval Office while telling the rest of us to turn our thermostats down. James Hansen has received grants amounting to hundreds of thousands of dollars to promote the Global Warming theory. Al Gore has invested heavily in the ‘carbon trading’ brokerage business. All of these men jet around the world, live in oversized houses, and ride in limousines. If the common people are to be required by law to reduce our ‘carbon footprint’, we need to demand that our leaders and the wealthy elite be restricted to exactly the same carbon allowance as everyone else.

We are not all together in the fight against Global Warming unless everyone is required to make the same sacrifices by sharing an equal ‘carbon footprint’ and an equal ‘carbon ration’, which should be assigned equally to every living person in the entire world. We need to hold the elitists’ feet to the fire and require them to make exactly the same sacrifices as the rest of humanity.