The US Congress barred the Pentagon from selling cluster bombs to other countries to prevent casualties among civilians. The decision became the late action to defend the US authorities against the criticism for their refusal to sign the Convention on Cluster Munitions, which prohibits the use of cluster bombs. 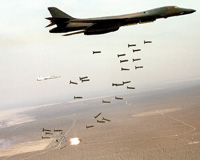 Many of world’s leading countries signed the Convention on Cluster Munitions in Norway’s Oslo in December 2008. A third of NATO members, including the United States, refused to sign the document. Israel, India, China, Pakistan and Finland supported the US at this point. The USA believes that the prohibition of cluster bombs will aggravate security in the whole world.

Russia did not sign the convention either. Russia’s Foreign Ministry said that cluster bombs as legal weapons played an important role in Russia’s defense interests. “Any munitions are dangerous and inhumane,” the ministry said in a statement.

Cluster munitions or cluster bombs are air-dropped or ground-launched munitions that eject smaller submunitions: a cluster of bomblets. The most common types are intended to kill enemy personnel and destroy vehicles. Cruise and ballistic missiles can also be outfitted with cluster bombs. They are also widely used in artillery hardware, especially in volley-fire systems. Sweden and France equipped their armored vehicles with cluster munitions.

Old-pattern cluster bombs have a large effect area, although it is impossible to give them a precise aiming at a target, especially when they are dropped from high altitudes. Thousands of unexploded bomblets can therefore be found on battlefields after military actions.

Five percent of smaller submunitions do not detonate and kill civilians, including children, for many years after war actions. Furthermore, cluster bombs are weapons of rapid response, which makes it very difficult to neutralize them. Italian cluster bombs are considered the most dangerous: it is impossible to neutralize them even with the help of remote-controlled countermine systems.

The prohibition of cluster munitions would cause a serious damage to Russia’s defense interests. The above-mentioned convention bans only old-time variants of cluster munitions, but not the high-tech weapons, which many countries use. The West has already developed self-guided and GPS-guised cluster munitions. The Russian arsenal presumably consists of outdated cluster bombs, although if they are equipped with self-destruction systems, which detonate the ordnance 100 hours after landing.

The first cluster bombs appeared during WWII, but became widely used after the war. The United States has made the most impressive progress in the development of cluster bombs since then.

The cluster munitions of potential enemies pose a serious threat to Russia. Russia would not be prepared for an adequate response at this point.