Washington tired of Ukrainian president and his puppet theater

The political party of Ukrainian President Viktor Yushchenko, People’s Union – Our Ukraine, has ceased to exist. All of its structures, including the press service and the analytical department, have stopped working. 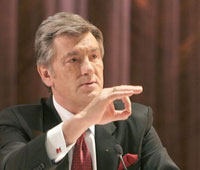 Washington tired of Ukrainian president and his puppet theater

Vladimir Skachko, a Ukrainian scientist of politics, said in an interview with Pravda.ru that Yushchenko’s party died because it was an unviable organization. “It was set up to implement crazy ideas of the president and fatten the wallets of the people from his team. It was an attempt to create a ruling party, which would allow to lead the nation. However, it was impossible to create such an organization on Yushchenko’s idiocy and greediness,” the specialist said.

NATO and Ukraine’s membership in the alliance was the key goal that the party was following in its activities. As experience showed, the Ukrainians did not wish to become the cannon fodder of the alliance in Afghanistan and Iraq. The European Union was the second goal of the party. It could probably be an attractive idea for some people to give the Ukrainians an opportunity to travel to Europe as guest-workers, but it was definitely not the national idea number one.

The prominent members of the party could be referred to as political prostitutes. They have lost their shelter now and are looking for a new home.

The parliamentary faction – People’s Self-Defense – has died too. Ukraine’s Home Minister Yuri Lutsenko said that the faction had spent its force, but it still exists in the Supreme Rada as a phantom.

The pro-presidential bloc of Ukraine was often against the president, who was mostly preoccupied with historical phantasmagorias against Russia rather than with Ukraine’s political and economic problems.

The new US administration obviously tries to get rid of Yushchenko as soon as possible. The presidential election in Ukraine will take place at the end of 2009 and in the beginning of 2010. Therefore, the political opposition between Yulia Tymoshenko and Viktor Yushchenko continues to intensify. The people of Ukraine are tired of Yushchenko’s political games, which he plays with their money.

Yushchenko has absolutely no chances to stay for the second term. Yulia Tymoshenko will most likely replace him in the office, although she is not a US favorite. Washington is currently replacing the characters of the Ukrainian puppet theater.